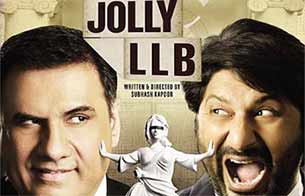 Subhash Kapoor's critically acclaimed legal drama "JOLLY L.L.B.", has been named in two categories at the 61st National Film Awards, which were announced here Wednesday. He says he is elated as it came unexpectedly.

"Jolly LLB" has been adjudged the best Hindi film, while Saurabh Shukla has been named the best supporting actor for his role of a judge in the same movie.

An excited Kapoor told IANS: "Our film has got two National Awards and this is like 'sone pe suhaga'. I was not expecting this."

"It's a proud moment for me and my team ... right now I can't express my feeling. I am also happy for our producers Fox Star. The film did well at the box office, but being rewarded with National awards is altogether a different feeling," he added.