Bangalore, Jan 23 (IANS) Abhay Simha, the director of Kannada film 'Gubbachchigalu' that won the National Award for best children's film Saturday, says it is a big recognition for his debut venture.

'The journey started as a simple idea about missing sparrows in our cities. It grew into a script and eventually a film! I should thank everyone who helped us and travelled along in this memorable journey, which has been finally rewarded with a big recognition like a National Award,' Simha told IANS.

'I am not unhappy that 'Gubbachchigalu' was not considered for the state government award. That did not bother me then. I am only excited to hear the news that my debut film got the best children's film National Award,' said Simha, a graduate of the Film and Television Institute of India (FTII).

'Gubbachchigalu' was produced by B. Suresha and Shylaja Nag under the Media House banner. It was omitted by the jury of the state awards for best film. It had, however, got the best child artist award from the Karnataka state government.

Suresha says he is quite happy about the National Award for 'Gubbachchigalu', which had a wonderful script and dealt with a contemporary theme - of city bred children missing out many important things in life because of their lifestyle.

'I would give full credit to young director Abhay Simha, who wrote a wonderful script based on a story written by journalist Ismail. The entire team of 'Gubbachchigalu' worked very hard and made such a good quality film, which has been duly recognised by the national jury,' he said.

'I do not want to do a post-mortem as to how the jury formed by the state government had omitted this film from the list of awards. It is all in the game. Now, the biggest honour has come to us,' said Suresha.

Simha, after completing his engineering, went to FTII in Pune for training in film direction.

'I had taken the help of my two good friends, Vikram Srivastava and Anmol Bhave, who were also my classmates at FTII. Both of them worked as cinematographer and music director for my film. The story of the film was written by Ismail, a veteran journalist who had worked for Kannada daily Udayavani,' he said.

'I am happy that my project was backed by B. Suresha who has already won many prestigious national and state government awards for his films. Suresha gave me full freedom to direct this film. There was excellent cooperation from artists who worked for the film. Prakruthi, who had an important role in the film, got the best child actress award from the state government,' said Simha.

Simha is working on a new project that is expected to have Malayalam superstar Mammotty in the lead. The film will be produced by big time Kannada film producer K. Manju. 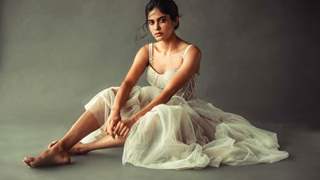 "Aashram has got me recognition not only in India but abroad as well", ...