You are here :
OVERVIEW ABOUT
31
NEWS DISCUSSION FANCLUB 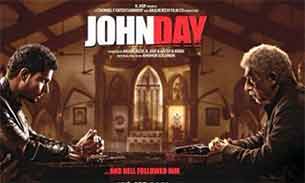 Filmmaker Ahishor Solomon, who is debuting with "Johnday" as a director, says Naseeruddin Shah's character in the film is inspired by his own life.

"Naseer saab's character is of a simple guy, who is very loyal and fears god. He believes in his own rules, but the tough time he is going through in life has shattered his beliefs. And I think his character is an inspiration from my own self," Solomon said in a statement.

"While I was writing the script, I was going through a very tough time. I had started hating myself and was broken emotionally. I believe every writer gives something of his own personality to the character he is penning down," he added.

"Johnday" is co-produced by Anjum Rizvi, Aatef A. Khan and K. Asif and also features Randeep Hooda and Elena Kazan. It is set to release Sep 13.