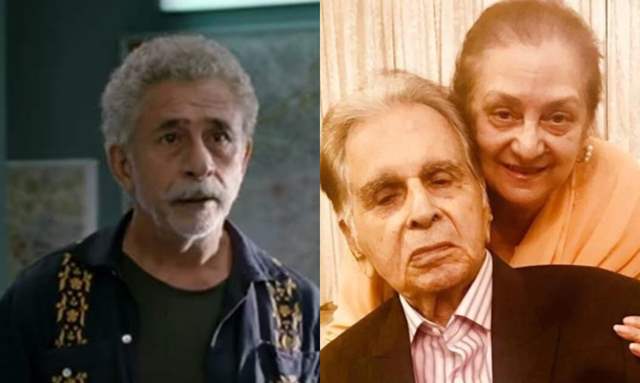 Veteran actor Naseeruddin Shah returned home from Mumbai's Hinduja Hospital after recovering from pneumonia on July 7, 2021. The 70-year-old actor in a recent interaction revealed that he was visited by Saira Banu at the hospital.

Dilip Kumar was hospitalised on June 30 after complaining of breathlessness. After a protracted illness, he breathed his last on July 7. Naseeruddin Shah, who was admitted to the hospital on June 29, was discharged from there on July 7.

Speaking with author and critic Saif Mahmood for Link Legal’s Beyond Law, Shah opened up about his meeting with Saira Banu.

“(Saira) put her hand on my head and blessed me and said — Sahab was asking about you. I was deeply moved. I wanted to meet him before I left. But unfortunately, the day I left, he also left,” Naseeruddin said, reported the Quint.

Shah’s son Vivaan Shah informed the fans about his health on Instagram. The Happy New Year actor shared two photos of Naseeruddin and captioned it as, “Back home.” Another picture has “He just got discharged today morning” written on it.

However, in a shocking turn of events, Dilip Kumar breathed his last on June 7. His trusted aide Faasil Farooqui shared his demise news on the actor’s Twitter handle. “With a heavy heart and profound grief, I announce the passing away of our beloved Dilip Saab, few minutes ago. We are from God and to Him we return.  - Faisal Farooqui” the official statement read.

The veteran actor also revealed how Dilip Kumar had once advised him to not become an actor. Recalling his early days as an actor in Bombay, Naseeruddin said that his family had no clue about his whereabouts and didn’t even know if he was alive.

Shah’s family then contacted Dilip Kumar, who they knew through his elder sister, Sakina Aapa. ‘A Wednesday!’ actor further revealed that he spent a week at Kumar’s house before he was sent back home.

When Shah confided in the legendary actor ‘with trembling legs’ about his dreams of becoming an actor, he was told, “I think you should go back and study. People from good families should not try to become actors.”

“I didn’t ask him how he’d become an actor in that case”, Shah laughed. The two actors ended up working together in the film ‘Karma’.

Speaking about his experience, Naseeruddin said, “That's the only time I think I have been nervous while acting in my life. Most of the time, I was too terrified to even approach him, apart from greeting him in the mornings.”

Actor Dilip Kumar was laid to rest with full state honours and celebrities such as  Amitabh Bachchan, Abhishek Bachchan, Shah Rukh Khan, Ranbir Kapoor and Karan Johar among others arrived at the late actor’s residence to pay their last respects.