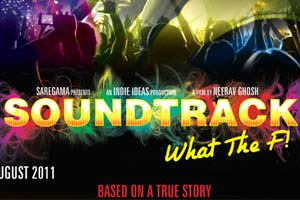 When a movie is called 'Soundtrack', the least you expect from it is to have a strong musical backing. Fulfilling this to some extent is this album that has more than one composer and also marks the entry of electronic music specialists Midival Punditz and Karsh Kale in Bollywood.

The songs in this album are of various genres, including some retro hits that have been nicely transformed into contemporary numbers.

The music of the film starts with 'Atomizer', which is Midival Punditz' and Karsh Kale's original composition and was selected for the official FIFA World Cup 2010 video game. Later, they had featured it in their album 'Hello Hello'. The song is high on electronic beats and low on lyrics - good for parties and lounges.

Then comes in Papon with 'Banao', a track that has a raw feel, owing to its acoustic instrumentation. It is spiritually inclined but the composition of the song is more apt for a love ballad. So, the devotional song fails to impress.

Next is 'Ek manzil' with Vishal Vaid behind the mike. The Sufi rock composition brings forward east meeting west amalgamation. It begins on a solid note but fails to hold the interest till the end, though it is backed by strong orchestration.

Then comes another Sufi rock 'Fakira' crooned by Vishal Vaid. It seems more of a situational track. Although the music is still impressive to an extent, the song, overall, is mediocre. But it might gain importance with visuals.

Up next is an inspirational song 'Main chala' in Kailash Kher's voice. The fast-paced song has a strong musical backing and the punch in Kailash's voice gives it an edge. The intense song creates drama and slowly grows on the listener. Overall, it is an impressive number that should go well with ardent Indi-pop listeners.

'Naina lagey' is undoubtedly the best song of the album that has been skilfully voiced by Papon. This semi-classical track is soul-stirring and takes romance to a different level altogether. It is appealing and soothing to the ears, which makes this a slow-paced harmoniously delightful track.

Next is a re-arranged version of the song 'Ruk jaana nahin', which was originally sung by Kishore Kumar in the 1974 film 'Imtihan'. The new version has been rendered by Suraj Jagan in his silken voice. Although old is gold, yet this version is not too bad, since it retains the qualities of the original track.

Then comes another old rehashed Bollywood song 'Yeh Jeevan hai', which had appeared in 1972 film 'Piya Ka Ghar'. The song is more contemporary as Malini Awasthi has given her own singing style to the song.

Then there are two instrumental tracks, which are equally impressive. One is called 'Symphony of the streets' and the other is titled 'Soundtrack theme song'.

Finally the album ends with the song 'What the F' that might look like another controversial song in the making owing to its title. However, there is nothing controversial about the song that is sung by Anushka Manchanda. Although it tries hard to impress with its quirky lyrics, experimental singing and composition, yet it doesn't appeal much.