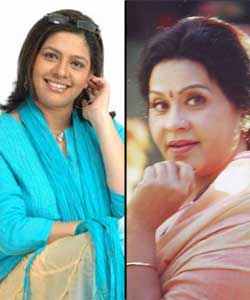 With all seasoned actors emoting under one roof for the very first time, R.K. Laxman Ki Duniya on SAB TV is promising to be an ambitious project. Veterans like Atul Parchure, Vandana Pathak, Vinay Yedekar have already signed on the dotted line while a few others are still waiting for their turn. We hear that renowned theatre artist Naina Apte and Radhika Vidyasagar have also given their consent to be a part of this interesting fable.

Throwing some light on the new characters, an insider states, "Naina Apte, a well known theatre, TV and movie artist and Radhika Vidyasagar will now join the cast of R.K. Laxman Ki Duniya. Radhika will play Naina Apte's daughter in law whereas Vinay Yedekar will essay the role of Radhika's husband."

Naina Apte was unavailable but her onscreen bahu Radhika Vidyasagar states, "I haven't started shooting for the show yet but it's a very interesting story and the characters will be identified by the audience."

As the show is going to replace Mrs. Tendulkar towards the end of this month, the shooting for the same will start within a few days.

Hope the show is successful in living up to the audience's expectations...

krnagu 8 years ago 100% true. why cant they replace those stupid shows. Tendulkar is good show.