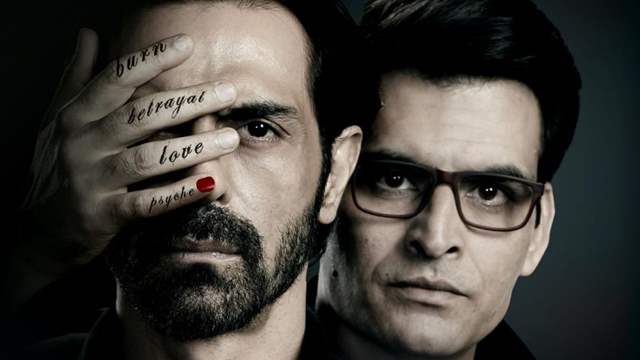 The first posters of the ZEE5 original film Nail Polish, starring Arjun Rampal and Manav Kaul, are out. The intriguing posters set the tone for the suspense-filled courtroom drama directed by Bugs Bhargava Krishna.

In one of the posters, Arjun is seen covering Manav’s eye with his palm, with bright red nail polish on his index finger. The other poster has Manav covering Arjun’s eye. His fingers have the words ‘burn’, ‘betrayal’, ‘love’ and ‘psycho’ on them, with his little finger painted bright red.

Arjun, who plays the role of a high-profile defence lawyer named Sid Jaisingh, said, “A man wearing nail polish on the poster has already got people’s imagination working. I promise you the intrigue it has created will be justified in this film, that is a meticulous written and directed psychological thriller, by Bugs Bhargava.”

Manav shared, “The energy on the set is quite intense and it has been a challenging role for me so far. The poster will confuse the viewers, especially when it comes to the polish on one nail. The uncertainty of the human mind will take centre stage in the narrative. I doubt people have got a chance to see something like Nail Polish in the OTT space. I am looking forward to the audience reaction and the premiere on Zee5.”

Nail Polish is touted to be ‘a uniquely constructed murder trial where the back story and the court proceedings are seamlessly interwoven into a journey of criminal discovery that leaves the audience guessing till the very end’. The film also stars Rajit Kapur and Anand Tiwari in pivotal roles. It is produced by Pradeep Uppoor, Seema Mohapatra, Jahanara Bhargava of Ten Years Younger Productions and Dhirajj Vinodd Kapoor.