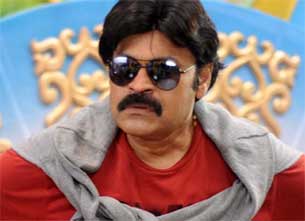 In upcoming Telugu comedy "Choosinodiki Choosinantha", actor Nagababu will imitate the role of his young brother Pawan Kalyan from his recent release "Attarintiki Daaredhi". The film's director hopes the audience takes it in the right spirit.

"Nagababu sir will essay the role of Pawan Kalyan from 'Attarintiki Daaredhi' and his character is also named after Pawan's role. We have even made him (Nagababu) don the same look as Pawan in the film. We want the audience to take all this in the right spirit and not get offended," the film's director Anil Vatupali told IANS.

"This has been done purely for entertainment purpose. Some of the recent Telugu films featured leading comedians imitating scenes from several star's films, but we thought only Nagababu sir can do this particular role. Any other comedian imitating Pawan Kalyan may not have gone down too well," he added.

The director clarifies that the intent is not to cash in on the success of "Attarintiki Daaredhi".

"We are only trying to have some fun. Even Nagababu sir enjoyed playing this role. We have no intention on banking on the success of the film," he added.