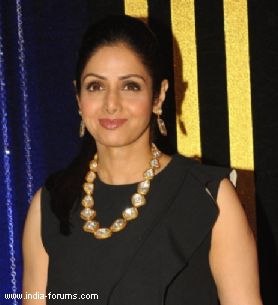 Veteran actress Sridevi, who is in Tokyo for the premiere of her comeback film "English Vinglish", has her husband Boney Kapoor by her side. Following concerns over his health after a recent accident, she has said he is "fine".

"English Vinglish" premiered in Tokyo Thursday, and it is slated to release across 33 screens in Japan June 28.

Sridevi posted a photograph featuring herself with Akie Abe, wife of Japan's Prime Minister Shinzo Abe, and captioned it: "With Ms. Akie Abe, First Lady of Japan, at the premiere screening of 'Madam in New York' ('English Vinglish') in Tokyo."

She also posed with her husband and film producer Boney, and wrote: "For all our well wishers, my husband is fine and here in Tokyo with me.Thank you for your concern. I sincerely hope this puts an end to all rumours about his health floating on social media."

Boney was reportedly caught in a car accident and suffered a minor injury while he was on his way to Wai for the shooting of his upcoming home production "Tevar".