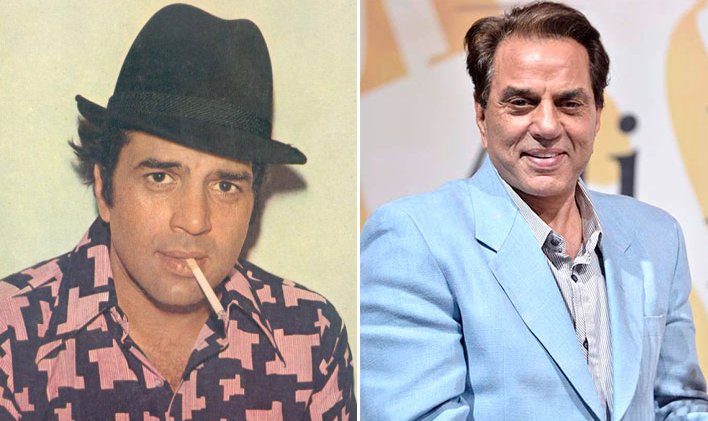 He is known as Bollywood's 'Yamla Pagla Deewana', but for long he was also seen as the macho hero of silver screen.

Veteran actor Dharmendra says he feels he completed over five decades in showbiz in moments, and now wonders how it went by so soon.

"'Ek lamba safar lamhun mein guzar gaya'...If we see it has been a long journey and it went by in moments. I now think why it went by so soon. I miss my colleagues, the atmosphere. I miss so many things. It was a beautiful journey," Dharmendra told IANS in an interview here.

Dharmendra, who traces his roots to Punjab, entered showbiz in 1960 with "Dil Bhi Tera Hum Bhi Tere" going on to create an image of Bollywood's He-Man, after Dara Singh.

The senior actor, who will soon complete 60 years in the industry, has entertained audiences with movies of all genres -- from the intense "Bandini" and "Satyakam" to potboilers like "Raja Jani" and "Pratigya", and as a comic artist with perfect timing in "Sholay" and "Chupke Chupke".

He proved his skills as an actor with "Anupama" and "Yakeen". In recent times, he was seen in "Life In A... Metro", "Apne" and "Yamla, Pagla, Deewana".

Dharmendra is known for his simplicity, humbleness and staying connected to his roots. The actor says he doesn't believe in being a "superstar but a super-human being".

He has infused these qualities in his sons -- Sunny and Bobby -- and says that they are taking it forward by teaching the same to the next generation.

"Fame and glamour don't remain. Being humble and grounded is what will remain (with you). People will say nice things about you. It is not a thought-out action and comes automatically. It came to me from my parents, from me it has gone to Sunny and Bobby," he says.

"Stressing on your achievements or other things hold no meaning."

Dharmendra has worked with his wife and Bollywood's "Dream Girl" Hema Malini in films like "Seeta Aur Geeta", "Sholay" and "Dream Girl". Post marriage, the couple was seen in movies like "Alibaba aur 40 Chor", "Baghavat", "Samraat" and "Razia Sultan".

He is averse to the idea of a biopic on his life, but turns to Urdu poetry to reflect on his journey and life.

The 81-year-old said: "I'm an emotional person; so this (poetry) is a good outlet for me. 'Jab kuch kaha na jae, jab kuch suna na jae, tab meri tanhai meri khamoshi se, aur khamoshi meri tanhai se baatein kar leti hai' (When nothing is said and done, my silence and my loneliness converse with each other)."

The actor, who is looking forward to his grandson Karan's Bollywood debut with "Pal Pal Dil Ke Paas", is content with the love and admiration he is getting.

"What's the benefit of writing a book on your life? I don't want to reach out that much to people. I have reached enough. I have touched their heart. I live in their heart, not in their brain."

Ask him who can be the next Bollywood's 'Yamla Pagla Deewana'?

"Only Dharmendra can be yamla, pagala and deewana at the same time."

On the work front, he is working on his first international short film "Dream Catcher", and will reunite with his sons for the third installment of "Yamla Pagla Deewana" film franchise.

There's still much left as an actor in the hero who held his own for decades among some of the most popular actors in Bollywood.

Did you know how Dara Singh was chosen for the role of Hanuman in ...

SEPIDEHh 3 years ago Dharmendra ji you are great , I have seen so many films of you like Dharm- Veer , Seeta Aur Geeta ... and many more memorable films , rains Forever

Deblina Chatterjee to be seen as Lakshmi in Vighnaharta ...
11 minutes ago

Here’s why Akhilendra Mishra initially denied playing the ...
13 minutes ago

Sushant Searched about Painless Death, Trouble in ...
20 minutes ago

Rishina Kandhari talks about resumes shooting, her perfect ...
42 minutes ago

Yeh Rishta Kya Kehlata Hai: Kartik to take care of his ...
53 minutes ago

Sushant Singh Rajput fans gear up for a second round of ...
53 minutes ago