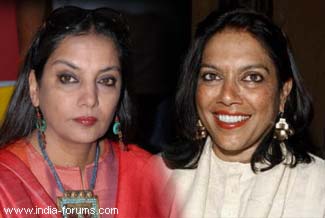 Shabana Azmi and Mira Nair are working together on "The Reluctant Fundamentalist", and the veteran actress says her happiness has doubled as both of them have been named to receive the coveted Padma Bhushan together.

The two, along with veteran actor Dharmendra, were named for India's third highest civilian honour this year, for their contribution to Indian cinema.

"We have recently completed a film together, 'The Reluctant Fundamentalist' and our happiness has doubled as Mira and I are good friends. I have become taller as I share the award with Mira and Dharamji," said Shabana.

Shabana is happy that after husband Javed Akhtar received the Padma Bhushan four years ago, she too has been named for it, and that the couple can now officially be called "Mr. & Mrs. Padma Bhushan."

"The year has started splendidly. I am very honoured and humbled by the Padma Bhushan. I am particularly delighted because Javed has received the Padma Bhushan four years ago and now you can safely call us Mr. & Mrs. Padma Bhushan," the 61-year-old actress said here.

Such an honour makes Shabana recall the day when her father, late writer Kaifi Azmi, reached in time for the premiere of her first film "Ankur" in 1974.

"I remember that day of September 1974 when my film 'Ankur' premiered. My father was in Russia during that time for some treatment but he called up in the morning and said 'I have reached'. I was delighted that my father and mother were present at my film's premiere," said Shabana, who recently launched a compilation of his Azmi's songs.

"Today, I want to thank Shyam Benegal and all those directors, co-stars, technicians who have helped me reach this position," she added.

Charvi Saraf is finally happy that her character got a ...
53 minutes ago

Bigg Boss 14: Teaser Promo of Nikki Tamboli is Out
12 hours ago