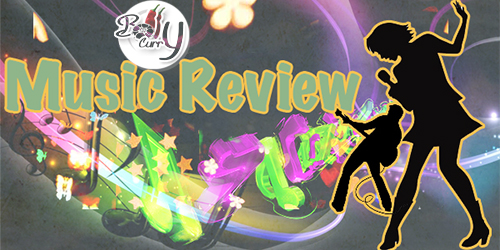 After making a grand entry in Bollywood with Raanjhnaa (2013), Dhanush is back to blow the audience's mind with his impeccable acting skills in R. Balki's upcoming flick, Shamitabh. Sharing space with the shahenshah of Bollywood, Amitabh Bachchan, this film also marks the debut of Kamal Haasan's younger daughter, Akshara Haasan. The trailer of the move is extremely intriguing, and has already generated a lot of buzz with the audience.
Produced by R. Balki, Balaji Telefilms, and ABCL Corporation, Shamitabh is the story of a deaf and mute junior artist (Dhanush), whose only dream is to become a
Featured Video 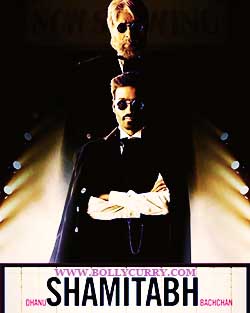 successful actor. The background score and the music of the movie has been composed by the legendary maestro Illayaraja, while the lyrics have been penned by Swanand Kirkire and Kausar Munir. Incidentally, this marks the 1000th film in Illayaraja's illustrial career.
The album opens with "Ishq E Fillum", a semi-rock number voiced by Suraj Jagan. The song has a rather dark vibe, creating a sort of intrigue in the listener's mind. Jaggan's rugged voice, coupled with Kirkire's lyrics, make it an interesting ode to films.
Next up in the album is "Sha Sha Mi Mi", which appears to be the title track of the movie, Shamitabh. Caralisa Monteiro, best known for lending her voice to "The Don Waltz" from Don 2 (2011), makes a fabulous return to Bollywood with this song. The only song in the movie whose lyrics have been composed by Munir (the rest have been penned by Kirkire), Monteiro's seductive voice only adds to the sensuality of the track.
Aside from being a phenomenal actor, Bachchan has been blessed with a great voice. He has lent his voice to the next track in this album, "Piddly Piddly". Relying heavily on the vocals, the soft music in the background only serves to bring out Bachchan's strong voice, which greatly compliments Kirkire's lyrics. The song is extremely different, nothing like what one has heard before.
Popular actor-singer Shruti Haasan has lent her voice for the next song in the album, "Sannata". Much like "Ishq E Fillum", the track gives off a rock vibe. Kirkire's lyrics are extremely interesting, and this song appears to be an ode to a lot of singers. Haasan's sultry voice, accompanied with the drum beats, makes this number great for live performances in a pub.
The next track in the album is "Thappad". Voiced by Suraj Jagan and Earl D'Souza, this song boasts of extremely inane lyrics, which is what makes it so intriguing. The strong vocals, backed with the electro-beats, work in the song's favor. This one's a must-listen!
The album concludes with "Lifebuoy", which starts off with Lifebuoy's famous tagline, and the rest of the song goes on to talk about germs and soap. Suraj Jagan has lent his voice for this track as well, but the vocals have been greatly synthesized, giving it a very electro-rock vibe. Given how the track basically goes on about soap and germs, the song is definitely worth a listen, especially for the amusing lyrics!
Illayaraja is truly a genius when it comes to composing music, something which can be seen in this album. The entire album is very different, and it cannot be categorised under a particular genre of music. Coupled with Kirkire's and Munir's extremely amusing and inane lyrics, the soundtrack of Shamitabh surely serves to create an aura of mystery and curiosity in the listener's mind, which definitely works in the favor of the film! BollyCurry rates this album, 4 stars out of 5.
We, at BollyCurry, urge you to tune into YouTube or your favorite music streaming website to give the soundtrack a listen. Comment below and let us know what you think of the album, and how excited are you for the release of the movie!
Author: Ritchelle C.
Editor/s: Pooja B. and Gunia K.
Graphics: Komal P.
Do you have a suggestion or comment for BollyCurry? Drop us a PM at BC_Dropbox today! 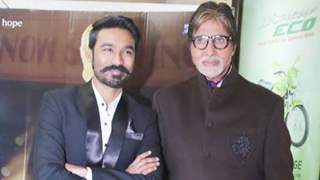