The Bhatt camp is back once again with their favorite star, Emraan Hashmi. Returning with a sequel to Murder, a movie and album that took the audience by storm the first time around, we can safely say that there's a great deal of expectations from Murder 2. However, the music this time has been composed by a new group: Harshit Saxena, Mithoon, Sangeet and Siddharth Haldipur. The question that stands now is, have the Bhatt brothers taken a risk in hiring a a new group when Anu Malik originally bought about a new sensation with the first sequel? Let's find out...
The album opens up with "Hale Dil", a romantic song crooned by Harshit Saxena. With his voice being in perfect sync with the music, it doesn't take long before Harshit entraps you in a beautiful trance; a feat easily managed in the first minute or so of the song. The background music is not too loud, nor too quiet and while it may start out at a slow pace, it slowly picks up, after which "Hale Dil" enters your 'songs I love' list. We won't be surprised if you put the track on repeat! A definite non-miss.
"Hale Dil" also has an acoustic version where the difference between the tracks is noticeable straight away. While the original version started out calmly, this version starts with guitar which follows through the entire song. This version also almost brings forward a whole different feeling, while the original showcases a more longing feeling, this version does away with that, what with the soft rock theme running in the background. However, the track is still worth a listen.
The next song in the album brings Sunidhi Chauhan for "Aa Zara". An apparently too-hot-for-telly item song, picturized on Yana Gupta for the movie and the lead pair for the more mellow telly, Sunidhi's voice, which is able to create that sensuous feeling that is needed for a song like this, is perfect for this track. Due to the aid of the dark natured music, it may not be a song to tickle everyone's fancy, but it does leave you intrigued in how it be transferred to the big screen.
"Aa Zara" also has a reloaded version which turns the entire song around. The dark natured theme that was focused in the original version seems to be lost in the music of this version, only finding a small hint of it here and there throughout the song. The addition of more beats changes it from the slow pace that it was at to a more peppier track, one that might actually work a club. Don't be surprised to find your head bopping! 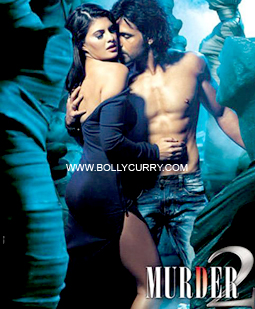 Something different to listen to in this album is "Aye Khuda". A song with saddening undertones, has Mithoon, Kshitij Tarey and Saim Bhat taking turns singing parts of the song. What really makes this track stand out is the switch of voices between the three singers. Their voices encapture as they croon their tales of pain and while the song follows a slow pace for most parts of the song, there are moments where a faster pace is adapted, creating an even better atmosphere for the pain that is to be assumed through this song. The lyrics are also a great listen, one of those rare chances where you have something to take away. We recommend at least one worthy listen.
"Aye Khuda" also holds a remix version which only works to add in more beats to the song and make it faster paced than the original. However, with the addition of faster beats, the actual effect of the song is not lost at all. For those that dislike loud songs, you may want to give this track a skip.
Continuing the streak of slow songs, "Phir Mohabbat" is next in the album. Another love song where hints of the previous songs can be found, especially the theme of "Aye Khuda", has Mohd. Ifran booming out the track. With the help of a guitar, later followed by a violin, Mohd. Ifran's deep voice portraying various emotions, makes him another perfect cast for this number. If you enjoyed"Aye Khuda", you'll surely enjoy this song too.
The last song in the album is "Tujhko Bulana". Back to a fast paced songs, Sangeet Haldipur and Roshni Baptist put their selves into singing this party track. While it may be an interesting song to watch on the big screen, it's nothing new to just listen to.
The overall album of Murder 2 turns out to have a variety of songs to listen to. It may not cater to everyone's needs but there are a good few songs that can be enjoyed. All in all, an interesting listen. Now only time shall tell if it will catch as fast as the first Murder soundtrack.
BollyCurry's Favorite: Hale Dil, Aye Khuda, Phir Mohabbat
BollyCurry's Rating: 3/5
Author: Amisha L.
Editor: Jenifer.
Graphics: Pooji.
16 Likes

Sara Ali Khan heads to Mumbai as she receives summon from ...
4 minutes ago

Bigg Boss 14: First look of the shopping mall, theatre and ...
13 minutes ago

exclusive
Exclusive Ashnoor Kaur on music video with Millind: It is something ...
34 minutes ago

Mohsin Khan gets injured on the sets of Yeh Rishta Kya ...
2 hours ago
View More
TOP