Bollywood and cricket are two things synonymous with India, so when these two phenomenon come together, nothing short of a miracle is expected. The world acknowledges Mahendra Singh Dhoni as a renowned cricketer and one of the most successful captains of the Indian Cricket team. It came as no surprise to anyone, therefore, when a biopic on Dhoni was announced. Essaying the titular character, we have Sushant Singh Rajput in the much anticipated sports biopic - M.S. Dhoni: The Untold Story. 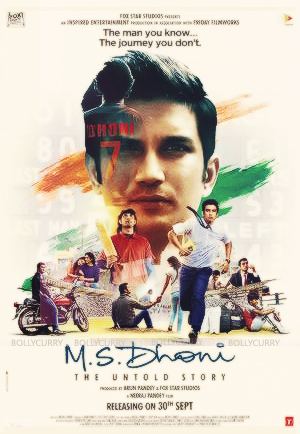 The album is composed by Amaal Mallik, unless stated otherwise, while Manoj Muntashir has done a splendid job penning the lyrics. The album comprises of eight songs, so without further ado, let's hear whether the album is a six or a duck!
The soothing melody "Besabriyaan" provides a strong opening. Armaan Malik lends his voice to this soulful track that borders on a ballroom feel. With a lot of piano and violin instrumentals in the background, the lyrics blend beautifully. A song that rides on its easy going ambiance, "Besabriyaan" is an immediate hit with the soul lovers.
Palak Muchhal is known for her powerful vocals and she does not disappoint with "Kaun Tujhe". This song is also a slow and melodious one but with a nostalgic feel. Beginning with piano keys in the background and a continuous humming, "Kaun Tuhje" is easily likable. Although the vibe is quite similar to "Besabriyaan", this song takes its place at the top of our favourite list.
Taking things a notch up the decibel scale is Armaan Malik with "Jab Tak". With not much instrumentals to ride on, the vocalist definitely makes the song work despite the sudden high pitches in the background. There have been better numbers and the song pales in comparison to its counterparts, but the lyrics are undeniably beguiling and worth a listen.
The music maestro, Arijit Singh, waltzes in with "Phir Kabhi". As expected of Singh, the song is extremely beautiful with a guitar strumming throughout. Despite being one of the longer songs of the album, it is smooth and easy on the ears. Known for his soulful melodies, the song is a nice break from the album's easy going vibe.
The next song in the album is Siddharth Basrur's "Parwah Nahin". A song that stands out so far in the album because of its upbeat melody and rough and raw singing, it spices things up a bit. The electric guitar strumming, coupled with the drumming, envelops this song and has one bobbing their head immediately.
The album comes with a redux version of "Jab Tak". Not too different from the original, it gives off a faster vibe that allows the listener to groove slowly and easily prefer this version. With dramatic drumming in the background, Malik takes his notes higher than the original.
Different from the rest is "Padhoge Likhoge" with its peppy and dramatic beats. With strong drum beats and the sound of the trumpets in the background, Ananya Nanda and Adithyan A. Prithviraj lend their beautiful voices to the track. Far from the regular party songs that Bollywood produces, "Padhoge Likhoge" is accepted with a breath of fresh air.
"Har Gully Mein Dhoni Hai" closes the album, and rightfully so. Rochak Kohli not only graced the song with his voice, but has also composed the song. This can easily be described as a "Dhoni anthem" with its melodramatic feel and heavy instrumental background. With compelling lyrics and music, the song screams Dhoni.
M.S. Dhoni: The Untold Story's album is a hit, as expected, and we rate it 4 stars out of 5. With an album filled with soulful and soothing music, one can only expect a blockbuster film. We encourage you to tune into your favourite music streaming site and give the album a listen, it definitely won't disappoint.
M.S. Dhoni: The Untold Story, biopic of India's famous cricketer, M.S. Dhoni, stars Sushant Singh Rajput, Kiara Advani, Herry Tangri and Disha Patani in pivotal roles. Anupam Kher and Bhumika Chawla are also a part of the supporting team. The film, directed by Neeraj Pandey under the banner of Fox Star Studios, will be released on the 30th of September. BollyCurry encourages you to book a ticket in advance, as the movie is certain to be sold out, at a theatre near you. Enjoy folks!
Author: Mohini N.
Editors: Ritchelle C. and Gunia K.
Graphics: Nadia N.
Have a suggestion or comment for BollyCurry? Drop us a PM at BC_Dropbox today!

4 years ago I loved all the song especially Kaun Tujhe , Sushant Singh Rajput ... keep it up!! really happy for U...