After the success that Band Baaja Baaraat saw last year with it's music, hopes have been high for the music of Ladies vs Ricky Bahl. Starring Ranveer Singh and Anushka Sharma, the film will also be introducing newcomer Parineeti Chopra, the cousin of Priyanka Chopra. Music for the film is composed by Salim - Sulaiman.
The album starts out with 'Aadat Se Majboor' which has already gained popularity since it has been played in the recent promos of the film. Sung by Benny Dayal, the song carries an instant pull to listeners due to his characteristic voice. Along with Benny Dayal, Ranveer Singh can also be heard rapping in the song, which only helps intensify the song for listeners. You will definitely catch your foot tapping to this number whenever it's on!
'Aadat Se Majboor' also has a remix version which is also sung by Benny Dayal with rapping from Ranveer Singh. Although this version starts off on a fairly weak note, it eventually gets better. The remix version holds more hype than the original version, but manages to lose the fun that was originally held. If anything, only take a chance with this version because the original version is a bit better to listen to. 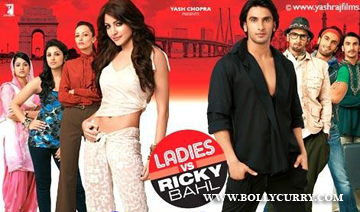 'Jazba' is next in the album which also turns out to be a fun-filled song like 'Aadat Se Majboor'. Shilpa Rao manages to create a fun filled atmosphere with her voice! Not only is this foot tapping number fun, but it also manages to make its listener dance and groove along with it!
There is also a remix version to 'Jazba' sung by Shilpa Rao as well. Although, this version turns the fun song into a club favorite, making it impossible for you to not get up and dance. With more beats added to this song, this version of the song will have you instantly moving.
Following the theme of fun-filled songs, this next song is not different from that. 'Thug Le' also turns out to be a fun-filled duo song between Vishal Dadlani and Shweta Pandit. The song goes back and forth between the age old argument as to who is better between boys and girls of the younger generation. It definitely turns out to be a fun filled song with beats that will have you dancing. Don't skip out on this song because you'll surely be missing out if you do so.
Salim Merchant and Sharadha Pandit join together for 'Jigar Da Tukda' which turns out have a strong Punjabi favor. And like every other up-beat song in this album, this one isn't left behind! You'll definitely be up and dancing to this song. Salim Merchant and Sharadha Pandit voices are in perfect harmony in this one and it's definitely worth a listen!
The last song in the album is 'Fatal Attraction' which turns out to be a haunting instrumental composition without any actual lyrics. However, there are a few moments of vocals from a female singer. The beauty of the song is in its superb composition! The pace and tone changes multiple times during the song and keeps you guessing for whats next! The entire charm of this song lies in the fact that there are no lyrics to distract from the superb music! Definitely give this one a listen, especially if you like good musical compositions!
Salim - Sulaiman have done a good job with this album. Surprisingly, there were no songs in the album that were either romantic or slow paced. They all just focused on having a good time! Therefore, this album is a little low on variety, but is definitely a high note in the fun-filled genre it is trying to portray!
BollyCurry's Favorite: 'Aadat Se Majboor', 'Jazba', 'Thug Le', 'Fatal Attraction'
BollyCurry's Rating: 3.5/5