View Profile
One of the most, if not the most, awaited science-fiction movies releasing in the fall of 2013, Krrish 3, sequel to Koi... Mil Gaya and Krrish, has finally launched its music album! 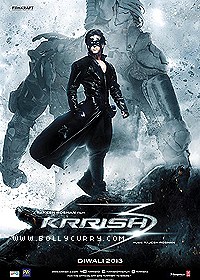 The movie, directed and produced by Rakesh Roshan, once again stars his ever-talented son Hrithik Roshan in the title role, opposite Priyanka Chopra. The music is  composed by the Rajesh Roshan, and the background score is handled by the talented duo Salim-Sulaiman Merchant. Vivek Oberoi and Kangna Ranaut also star.


The album comprises a total of seven original tracks, inclusive of two remixes. Over all, it can be said that the songs on the album are rather prolonged. It is said that over-expectations result in unintended blunders, a fact that can be applied to the music of Krrish 3. The songs are mediocre, with some exceptions.
The album opens with the title track "Krrish Krrish". It comprises of some hero type melodies that has the potential to garner viewers' attention. Majorly sung by Mamta Sharma with accompaniment by Anirudh Bhola, it is the piano in the background, playing the signature tune carried over from the first film in the franchise, that is the most beautiful part of the melody.
Another retake on "Raghupati Raghav" is next in line, with Neeraj Sridhar and Monali Thakur taking lead on vocals. It begins on a classical note, but as it goes on, misses its beat and fails supremely to garner an impressive reaction. The only difference in the remix is that additional beats are given by DJ Shiva and Rajesh Roshan in an attempt to make the track more catchy and likable.
The first romantic number in the album comes next. "Dil Tu Hi Bata" has Alisha Chinai and Zubeen Garg crooning interestingly written lyrics. The song is slow and is not to everybody's taste, but is definitely worth at least one listen. The remixed version has a distinctly DJ Shiva taste, with added beats to spice it up. However, we think the original sounds much better.
Mohit Chauhan and Alisha Chinai lend their voices to the joyous "You Are My Love" and make it shine. The track is perfect for the duo and is comparable to Krrish's "Dil Na Diya". Fun fact: Priyanka Chopra was initially slated to sing this track but things did not go as planned and Alisha was called in.
The last track in the album is "God Allah Aur Bhagwan" and is a prayer with the melodies of the title track. The lyrics refer to the people thanking their Lord for bringing Krrish to the world. Sung by superstars Sonu Niigam and Shreya Ghoshal, the song holds a lot of potential as it brings memories of the heroic moments in all three films.
Another fun fact: While the album was composed by Rajesh Roshan's home production studio Krishna Studio, the official rights have now been obtained by T-Series at a total of
60 Million ($920,000)!
And there you have it, the music of the upcoming Krrish 3! But don't take our word for it - check the songs out yourselves and tell us what you think. We're sure it'll be a good flow with the film, expected to create a record worldwide. BollyCurry does miss the magic of Rajesh Ji's earlier compositions such as Kaho Na Pyaar Hai, but we do wish the entire cast and crew of Krrish 3 all the best as we eagerly anticipate the November 4th release.
Writer: Sonia R.
Editor(s): Aradhna K. & Jenifer Y.
Graphics: Amna