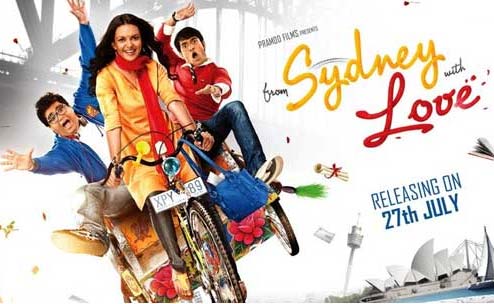 "From Sydney with Love" marks the debut of many a people, including the stars and the director, and interestingly the soundtrack offers fresh and tempting music to the listeners. Sohail Sen, who gathered many a cheer for his work in "Mere Brother Ki Dulhan", has composed the music for this one.

Taking you straight to Australian soil, the album kicks off with the title track "Feeling love in Sydney" with the listener welcomed by Didgeridoos, a wind instrument developed by Indigenous Australians 1,500 years ago and it is still very popular.

The track than gives you a hip-hop feel and some good electronic sounds have been added to keep you grooving. Chorus is extremely good with backing vocals by Roshni Baptist, but it is Sohail's voice that steals the show here. The track will surely rock on the musical charts.

It also has a remix version with the dialogues from the film and some peppy beats to transform it into a dance number. However, the original is a better option in terms of composition.

The next song is "Ho jayega". With Mohit Chauhan behind the mike, seldom does a song go haywire and he proves it with the song which has soulful melody. The singer has got good support from Monal Thakur. Together they mesmerise you completely. It has an acoustic touch. Although the composition is simple, it manages to leave an impact with its essence of love.

There is a remix version too, which is a total dud.

Time for some Bhangra as Mika Singh takes centrestage with "Khatkaa Khatkaa" - it has good dhol beats coupled with electronic sounds to make you dance. Mika is on a hit spree and this one is going to join the list.

Everything about "Naino ne" is just beautiful. Palak starts off the song with some Bengali lines and than just bowls you over with her delicate vocals. The subtle melody is comforting to the ears and Mohammed Salamat has turned out to be perfect partner for her. Together, they make you fall in love. A perfect song to welcome the monsoon with your loved one.

Next up is "Item ye hi fi". It is laced with sound of guitar riffs and techno beats. Neeraj Sridhar is good with the vocals but it is the composition that impresses you more with its diverse sounds.

Last but not the least is the track "Pyaari Pyaari", where Thor Patridge and Nabin Laskar dole out a reggae composition by joining Sohail Sen. Brooklyn Shanti gives you a taste of Calypso, a style of Afro-Caribbean music that originated in Trinidad and Tobago, albeit with some Bengali lyrics here and there. Sohail also has sung a bit and the track is total enjoyment.

Final verdict is that the album is definitely worth a shot and deserves all the love from the listeners for its fantastic songs.