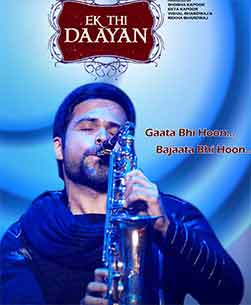 The music album of director Kannan Iyer's forthcoming movie "Ek Thi Daayan" is short and well-composed. Keeping up his reputation, music director Vishal Bhardwaj has given due importance to each and every song.

The album has five tracks and all of them have their own distinct ways of conveying a story. An interesting pack of songs, the album is quite entertaining.

"Yaaram", the first track, was initially released as a solo - and no wonder that decision was taken. The lyrics by Gulzar, crooned by Sunidhi Chauhan and Clinton Cerejo, weave magic. The song begins slowly, but gains momentum midway, sounding very pleasing to the ears. The music does not overlap the singers' voices, and the song truly boasts of perfect balance.

An interesting composition, "Tote ud gaye", starts with Punjabi beats which continue in the background throughout the song. This is a full-of-fun composition, which changes its beat midway. Rekha Bhardwaj brings the rustic touch of her voice to the track and sings it in a way only she can. Suresh Wadkar complements her. The lyrics, like some of Vishal Bhardwaj's past songs, are quirky. Singer Sukhwinder Singh brings the typical Punjabi feel to the song. But it is not easy for the listener to visualise the song.

"Kaali kaali", sung by Clinton Cerejo, narrates how a man describes the charm of a woman and her eyes. The music is different and it initially becomes a little difficult to classify it. But on the whole, it gives the feel of a romantic track. The 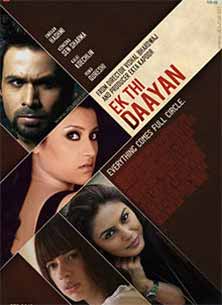 lyrics are worth paying attention to. A good composition, it can be a favourite of many and liked by some, but definitely cannot go unnoticed.

With sounds of crickets, wolves and 'ghungroos' setting the mood for "Lautungi main", one can imagine that this one's definitely not cut out for romance. It starts with mellow music, but as soon as Rekha Bhardwaj comes in the picture, the song becomes noteworthy. The lyrics are in Hindi mixed with a Haryanvi touch. It talks of a woman promising to return for someone. One can call it the modern version of "Kahi deep jale kahin dil" from 1961 movie "Bees Saal Baad". The song is very high on drama and suspense. Also, it is a long song thanks to the huge musical gaps given in the middle. The song turns spine-chilling towards the end and you know it is so well-suited for "Ek Thi Daayan"!

The last track is "Sapna re sapna". Sung by child artiste Padmanabh Gaikwad, it holds the innocence in the song. The aspirations and imagination of a child are highlighted in the song, which is high on music and low on lyrics. You could call it a lullaby, a sad song, or just an expression of a child with no baggage. But kudos to the singer.

Overall, it seems like a lot of thought has been put into fine-tuning the compositions for this album. Not trying to add many songs clearly gives the intelligent music an edge. Vishal Bhardwaj plays his role of a music director very well. The music is for all those who are open to listening something different.

(Yashika Mathur can be contacted at [email protected])