View Profile
Yash Raj Films is back with their final release for 2010, Band Baaja Baraat. Main leads of the film will be Anushka Sharma and the debutant Ranveer Singh. The movie is about a duo fresh out of college looking for means in the big bad Delhi world, where they end up opening a wedding planners' business jointly - strictly as friends! How the claimed friendship blossoms into love through their masti filled journey in the capital city jolly with big fat weddings is still to see...Meanwhile, the music album has been launched, with Salim-Sulaiman at the helm of affairs, lyrics by Amitabh Bhattacharya, and a total of 9 songs. 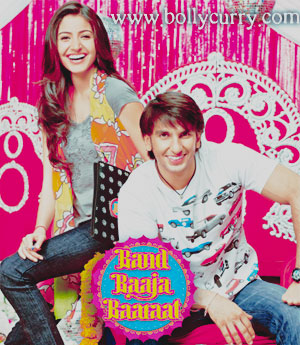 'Ainvayi Ainvayi' sung by Salim Merchant and Sunidhi Chauhan kick starts the album. The song is pacey, deeply Punjabi in essence. You'll constantly hear the music of a banjo and flute out in the background. This song will definitely have you tapping your foot wanting to go out and shake a leg.

The Dilli Club Mix of this original, sung by Master Saleem and Sunidhi Chauhan, has more pace still than the actual song, and the foot tapping continues too. Don't be surprised if you find yourself humming the tune after hearing it a couple times - its the addictive kind!

The second song of the album is 'Tarkeebein' which is sung by Benny Dayal with Salim Merchant coupling in. Taking a different route from 'Ainvayi Ainvayi', this song definitely has a more calm feeling behind the lyrics. And ironic it is then, that inherently the lyrics hold a rebellious feel about themselves!
Next in the album comes the song 'Aadha Ishq'. And namesake, yes, it is a love sonsg. Sung by Shreya Goshal, with a few contributions from Natalie Di Luccio, the song has soft music which evokes the enchanting dreamy effect from being heard in repetitions.
'Dum Dum' is next in line. Starting out with an enigmatic composition, the song evolves into a paced rhythm. With Benny Dayal and Himani Kapoor as the singers, the song is for sure a dance number. The music is hypnotizing and the lyrics take you in.

Just like with 'Ainvayi Ainvayi', the Sufi version of this song will have you wanting to dash out to the dance floor. This version has Sukhwinder and Himani. We guarantee the original and this rendition of Dum Dum to become a rage with the disc going crowds soon!
Any Yash Raj Films music is incomplete without a sad or slow soundtrack. Just to bring that along, Salim Merchant and Amitabh Bhattacharya come together for 'Mitra'. A soft melancholy, the song is lamenting and touching, and enjoyable in the bittersweet pain it evokes.
The Punjabi dash is pronounced with Labh Janjua, Salim Merchant and Harshdeep Kaur presenting the age old folk song 'Baari Barsi'. The music in itself manages to show the the Punjabi pre-wedding feel. The song has been worked on to bring forward the fun theme of the music and lyrics.
The last song in the album is the theme song of Band Baaja Baraat. It starts out with trumpets playing in the background which eventually are joined in by a range of well matched instrumental symphonies. Along with, Salim Merchant and Shraddha Pandit lending their vocals. A catchy melody that should stand out as something of wedding music.
Overall, the album is great. Salim and Sulaiman have put forth a good combinations of music and singers and the song tracks will definitely hold you captive a while!
BollyCurry's favorite: 'Aadha Ishq', 'Dum Dum - Sufi Mix'.
BollyCurry rating: 3.5/5