Promising a fresh take on the younger generation is this upcoming teenage film Always Kabhi Kabhi. It's about love and moving on to the next phase in life, a simple rom-com for the teens of today. The music director's chair is filled by Pritam, so it is fair to expect that the film's soundtrack will be a chock full of chartbusters true to the record he has established over the past couple of years.
The album starts out with the title song "Always Kabhi Kabhi", sung by Bhaven Dhanak, Sanah Moidutty and Harmeet Singh. Right from its introductory notes, the song instantly catches your attention. Due to the choice of instrumentation, you can surely tell that it's a song made
Featured Video 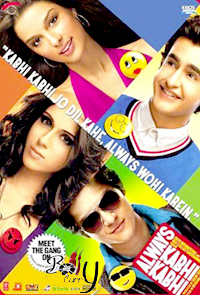 for the younger generation. The lyrics are suitable for the targeted teen demographic, but for the broader audience beyond, they seem to be a bit too simple and dull.
The unplugged version of '"Always Kabhi Kabhi" does a much better job of hitting the mark. Sung by Apeksha Dandekar and Vinnie Hutton, there is an interesting and slow start to the song which continues all throughout. The lyrics a much more clearly defined than the original and the mood and emotions of the song become more palpable due to the simplicity. All the ears are treated to - apart from the lyrics - is the simple strumming of a guitar, allowing the vocalists to bring the lyrics to life unlike the original where they were easily overpowered.
The next song in the album is "Antenna", which gets off to a perky and preppy start. Benny Dayal and Apeksha Dandekar work a little too hard to set the tone in this track. While the song tries to be 'modern' and 'hip' for the younger generation, it's far from such. The background music might interest you to a degree, the lyrics will certainly not. This is a song that you can surely free to give a miss from the album. The only appeal of this song might be the fact that it's picturized on SRK himself when he makes his appearance in the film.
"Antenna" also has a reloaded SRK mix which has singers K.K and Anupam Amod singing instead along with Apeksha Dandekar. The start of this version of the song and the music seem to be overall better than the original song. Although it has the same underwhelming lyrics, the music is enough of an improvement to hold the listener's attention longer. Apart from being catchier, this version also scores higher marks for its clarity.
"School Ke Din" is next in the album which is in short, the days back in school. Ishq Bectors raps for the track while Suhail Kaul sings. One of the better songs in the album, although it would've lived without the rapping, which could almost make you laugh and regret the decision of listening in the first place. Luckily, it only shows up twice in the entire song. Suhail Kaul does a great job with the song with his mesmerizing voice.
The album then moves onto "Better Not Mess With Me" which has two versions, the rock and club mix. Sung by Sunidhi Chauhan, it is simply about a girl who knows what and how to get what she wants. The rock version - for lack of a better term - rocks! Especially halfway through the song, the youthful sound really kicks in. After that midpoint, the song takes a turn towards the soft and sweet, but then reverts back to its original genre. The fluctuation provides for an interesting and unique experience.
The club mix of is sung by Shefali Alvaris and unlike the rock version, the music takes a turn for the worse. With a different voice and a different choice of music in the background, some of the meaning that was heard in the other version of the song is lost. If anything, only the slow part of the song seems to be the only part worth hearing. The hard punk lyrics that should rightfully accompany rock music don't suit the orchestration in this version and neither does Shefali's voice. Although she tries to match up, she simply isn't able to quite get that grit and power. Another skip for the album.
"Undi the Condi" is the next track in the album, sung by Shaan and Aditi Singh Sharma. This song seems to be time-traveling to the past where such songs were used with college students. The music of the song seems to be quite fun and retro, and this time the lyrics don't disappoint either - they contribute to the fun feel of this track.
It's only towards the end of the album where you hear for the first time a slow song; the last song in the album is "Jane Kyon" which has a soul version and a sufi version. Naresh Iyer does a great job of captivating the listener in the soul version. With soft and subtle music in the background, Naresh's voice is full of depth and feeling. More music seems to slowly seep into the song, but it doesn't affect the mood or the emotions of the track. This song could surely be tagged as a love song with a touch of sadness hidden in the lyrics. Your heart will be touched through this song and it's even worth a repeat listen.
In the Sufi version, you'll hear Shafqat Amanat Ali's voice along with a slower pace. But in spite of these changes, the feelings and emotions are not lost in the transition. In fact, if anything, there might be more emotion this time around. Because of Amanat Ali's deeper voice, there is an even more intense effect. This version is also worth giving a shot, even after hearing the soul version beforehand.

Overall, the soundtrack for Always Kabhi Kabhi is somewhat interesting. There is a bit of a variety in the music choice, but not as much as is desired. There are a few versions of a few songs that could've been eliminated from the album altogether. While it seems that Pritam worked hard to break his typical mold on the music for this album, he has yet to reach his full potential.
BollyCurry's Favorite: Jane Kyun, Better Not Mess With Me [Rock Mix]
BollyCurry's Rating: 2.5/5