View Profile
Tinsel town's glamorous lady Priyanka Chopra, seems to be making an obsession out of her new found musical passion. So much so, that rumors now claim disruption in shooting 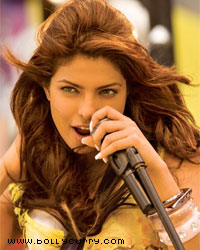 schedules for Anurag Basu's film Barfee, owing the frequent to and fro US trips PC is having to undertake for her debut music album.

Certain sequences to be shot in Hong Kong have been held up in particular owing Priyanka's absence from the scene, to be present instead in LA for her album, affecting the schedule so far as to cause a major shift in the release dates of the film from early 2012 to mid 2012.

With this shift in the release dates, the one person who's most affected is Southern beauty, Ileana D'Cruz, for who Barfee serves as the Bollywood debut launch pad.

Essaying the role of the tritagonist, Ilena awaits the release perhaps with greatest anticipation!

Contrary to all the negative buzz however, UTV's head honcho, Siddharth Kapur has denied any such in-cooperation from PC, who according to him has been explicit about her parallel professional commitments from the start.

Here's to the second round of Ranbir and Priyanka's onscreen chemistry, whilst wishing Ileana luck for her maiden venture!