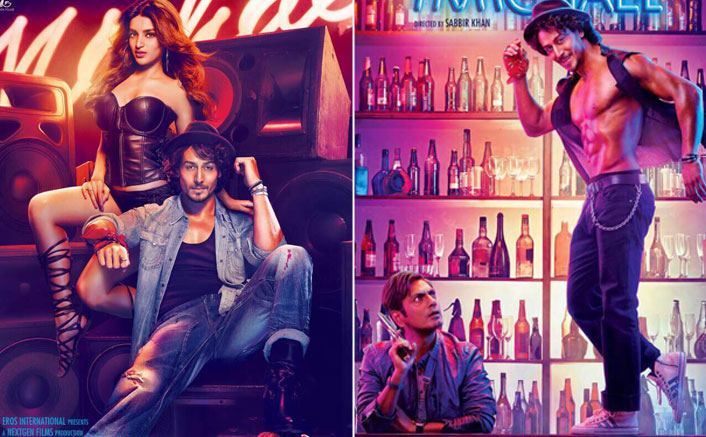 This film starts off with a promise and holds your interest till the interval. After that the narrative turns into a cliched Bollywood masala film that fails to impress.

The writing is good in parts. With all Bollywood liberties taken, the setup is based on cliches. However, the surprise element is the development as the plot navigates adroitly. The characters are more complicated than we expect, and the end is obviously predictable.

As the film opens with a prologue, we see Michael (Ronit Roy) grooving as a background dancer. Soon he is given the boot because of his aging visage. Dejected, he drinks and while sauntering the streets in a drunken stupor, on his way home, he finds an abandoned baby. He takes the child home in a gritty neighbourhood in Mumbai and raises him as his own. Thus, the name Munna Michael.

Munna has an affinity for music and during his growing years becomes a good dancer, but Papa Michael disheartened with his own career hopes that Munna (Tiger Shroff) gets into the Corporate Sector. So he constantly discourages Munna from being a dancer.

But lack of funds and no real qualifications for a corporate job, push Munna into dancing. He takes up dance challenges at the local clubs. Soon he is barred from all dancing bars in Mumbai. Nonplussed, he moves to Delhi to try his luck.

While Munna is an excellent dancer and there are lot of dance sequences in the film, we notice something else: The film does not fall into the ancient cliches of dance dramas or dance competitions. Instead, it turns out to be a corny pot-boiler crammed with romance and bromance.

In Delhi, Munna chances upon Mahinder Fauji (Nawazuddin Siddiqui) a thug and the owner of a five star hotel. After being impressed with Munna's dance moves, he confesses to Munna that he is a closet dancer and forces him to be his teacher.

During the dance training process, their bromance flourishes. Mahinder later confides in Munna about his one-sided love for a dancer called Dolly (Nidhi Agerwal) and he makes Munna promise to unite both of them. At this point the end is obviously foreseeable.

Tiger Shroff though talented in dancing and parkour, fails to impress with emotions which are often mismatched with the scene. That's because the script is perfunctorily crafted, and the discomfort on his visage is clearly visible.

Nidhi Agerwal in her maiden oeuvre is fairly competent. She matches Tiger, step for step. In some scenes and dances, she seems like a clone of Deepika Padukone and that's because, the Director had probably envisaged her role as that of Deepika's. In fact her actual name in the film is Deepika Sharma and Dolly is only an alias she uses for the dance club.

While Nawazuddin is a brilliant actor, even the best of camera angles can't convince you that he can fight six feet hulks. Nevertheless, he lights up the screen. His character is definitely interesting and intriguing as he sums it up with his dialogue, "Desi hoon, but forward thinking, cool dude hoon."

Among the supporting cast, it is Pankaj Tripathi as Mahinder's younger brother and lackey who stands out.

The songs are mediocre but well-choreographed in typical Hindi film fashion.

Overall, the film has good production values and is definitely not the apt tribute to Michael Jackson as suggested by the Director.

Rajav 5 years ago I agree wid dis review. Movie will appeal to only die hard fans of Tiger.