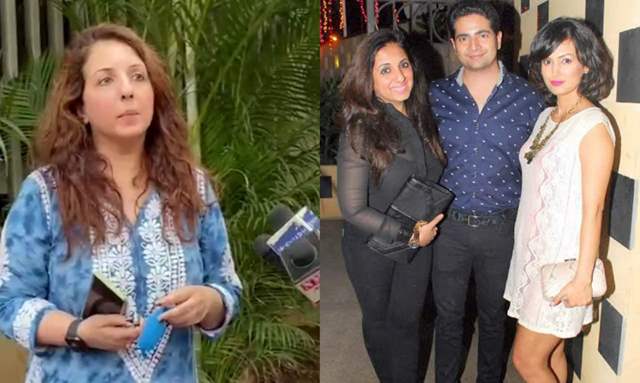 Karan Mehra was arrested after his wife Nisha Rawal alleged that he assaulted her last night. While he was granted bail, he has also made multiple revelations about their marriage in an interview with India Forums. Supporting Nisha and her claims is astrologer and tarot card reader, Munisha Khatwani.

In a media interaction, she said, ''I am a good friend of both Karan and Nisha. We have known for a while but were told not to be involved because we know a lot of things. But after the events of last night, we couldn't be quiet today. Me, Rohit Verma, and Kashmera Shah, we are here to support her since the morning. I want to convey that as her friends and as her family, this is true that we can't put up with this anymore and we have to speak up now. Nisha is going to clarify everything and she is hurt, something that people do have an idea of now, but after this incident, we can't be quiet anymore. I have been asked to withhold any information regarding the events that happened last night. It is better that she tells everything because this is her story.''

Karan and Nisha tied the knot in 2012 and have been married for almost a decade now. The two have a 4-year-old son Kavish from their marriage. Earlier last month, there were reports about things not being well between the duo, however, Nisha went on to call them false.

3 months ago Karan & Nisha tied the knot in 2021 but have been married for a decade?? Who writes these news-articles without getting them proofread? Seriously!

3 months ago I just watch both of karan and nisha interview. Karan just recovered from covid-19. I asked my aunt who is a doctor that will he have the strength to hit his wife head on the wall. She said no as the strength limitations can't let him to any physical. After recovering is still a long process to get original strength back. And Rohit Verma said that Nisha was very big actress and Karan was nothing. Maybe Karan was nothing but Nisha was a flop actress so there was nothing big about her.he said that she was even offered yrf. Like really? Yrf which works with superstars want a flop actress in their movie?Majority of people only know her his wife. Nisha said that her so called brother told karan that if he doesn't have the money for alimony he might give him the money for alimony but in this covid-19 times when real siblings are trying so hard just to make it . Why would he give money? Nisha said that till the son 12th standard she doesn't need karan money but why is she asking money from now? When journalist were asking her questions she was getting irritated. I would understand that she is hurt but why give a press conference immediately after report and also when you are still unwell. Now on karan interview. He answered all the questions calmly. He said that he had provided all the bank statements as Nisha said that karan sold all her jewellery. Which during covid-19 time. I m sure many people around the world would have done it to survive. I m not a fan of karan and only got to know about him in bb house as a contestant.

3 months ago This lady munisha, is she not a tarot card reader?? She is supposed to predict future. I remember her from the simi grewal’s India most desirable interview!Why did she not predict their future????? Anyways, coming back to this topic, this looks staged and fake and well planned! I am not saying I believe karan 100% right but definitely what nisha and her gang are saying does not look like it’s the truth. Karan may have cheated on nisha and therefore she has planned all this to get revenge from karan. And about the alimony, why does a independent woman need alimony from her husband for her expenses. Get out and work for your expenses.Childcare can be shared 50-50 but you should not expect your husband to work like donkey while you just sit at home in his expenses

+ 3
3 months ago This is so sad. Another celebrity couple whose marriage on the rocks and their so called friends seem to be meddling too much

+ 7
3 months ago Firstly, from the looks of it, this Nisha seems to be a huge attention seeker and playing the victim card. With Karan on this one.Secondly, India Forums, for the UMPTEENTH time, for God's sake, PROOF-READ your articles before publishing! They married in 2021 and have a 4-year-old son?!You guys are a big stain in the name of journalism.

3 months ago And here we go…Already showing support to the woman without knowing the entire incident. This is just sad.

+ 5
3 months ago LOL we all know what kind of people these dramatic celebs are, be it Kashmira Shah or Rohit Varma or this publicity hungry Munisha. Nisha is friends with all these bad people. Putting all blame on Karan is so wrong. It's not like that Bipolar Nisha Rawal has done nothing wrong. She should be punished as well.

3 months ago She is only a friend. How can she speak anything coming from one side only. She said this is nisha story but what's about karan story. Karan was in bb house and he was the calmest person in that mad house. I know that none of us know the whole truth but she is putting the whole blame on karan