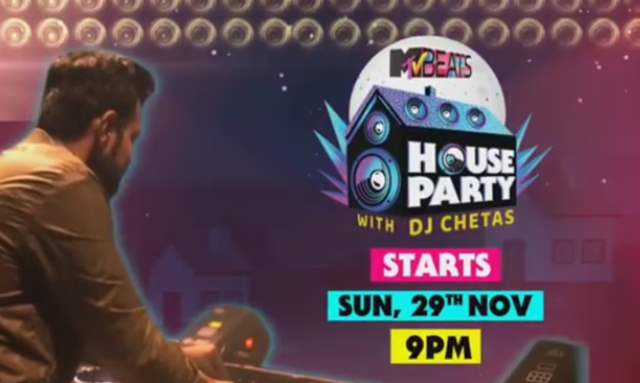 While parties at clubs are the ultimate stress buster, what sets house parties apart is the joyful vibe they create, with your favourite gang and a perfect combination of food and music. With house jamming sessions becoming the new normal in the current scenario, MTV Beats is here to take it a notch higher, with some of the best music line-ups by the man himself – DJ CHETAS! A household name in the world of DJs, Chetas has multiple accolades to his credit and is the only DJ in India to have made it to the DJ MAG Top 100 DJ’s list. He is all set to create magic with ‘MTV Beats House Party’ on MTV Beats!

Starting 29th November, every Sunday at 9 PM, MTV Beats House Party will be your go-to destination for the best house party, as the line-up will bring some electrifying party songs, that won’t let you miss your clubbing nights! An hour-long slot of foot-thumping Bollywood remixes, with the right tadka of mashups, MTV Beats House Party will set the mood of your weekend parties like never before!

“It's been an overwhelming year for all of us and one element that's been really impacted is the party scene. Stuck indoors and unable to huddle up with friends, our Saturdays aren't the same anymore. I partnered with MTV Beats to create House Party which intends to twist this monotony and offer a party-like experience but within the comforts of our homes. This dedicated one hour slot will feature exclusive remixes and mashups which have never been played before to give everyone the #DJChetasExperience from the comforts of their homes. I am really excited to be a part of this property and indulge in some musical delights till we get back to the new normal.”