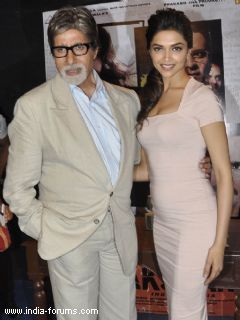 MSM Motion Pictures in association with Saraswati Entertainment Creations Limited (SECL) and Shoojit Sircar & Ronnie Lahiri's Rising Sun Films today announced their next feature film 'Piku'. In the lead roles, 'Piku' will star the legendary Amitabh Bachchan along with the stunning Deepika Padukone and versatile Irrfan Khan. The first schedule of Piku will go on the floors in August 2014. The film is slated to release on April 30th, 2015.

Talking about the film Ms. Sneha Rajani Dy. President and Head, MSM Motion Pictures states, "We at MSM Motion Pictures are endeavouring to create content that engages, evokes & entertains. 'Piku' gives us just that opportunity to co-create engaging and high quality content which we believe will entertain our audience the world over. Working with Mr. Amitabh Bachchan yet again in my new role is an absolute honour. As for Shoojit, I have been an admirer of his work since Yahaan and I am really looking forward to working with him and the delightful ensemble cast which includes the very talented Deepika, Irfan and many others. We are very excited to team up with Saraswati Entertainment Creations Ltd and Rising Sun Films for Piku."

Says Director Shoojit Sircar "The charisma of Mr. Bachchan, seamless acting of Deepika with the versatile flair of Irfan Khan and the evergreen Moushami Chaterjee will make Piku an experience for me. I am looking forward to this fantastic opportunity of working together with such gifted talent from the industry. We are very happy to partner with MSM Motion Pictures and Saraswati Entertainment Creations Ltd. to bring this wonderful film to the audience, early next year."

Piku is scheduled to release on April 30th 2015