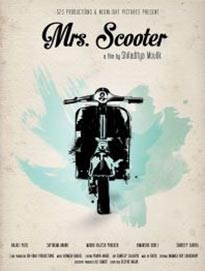 "Mrs. Scooter", an independent Hindi feature film directed by debutant Shiladitya Moulik, is part of the official selection at the New York Indian Film Festival 2014, scheduled to be held May 5-10. The director is confident it will strike the right chords.

"We are one of the talked about films in the prestigious list of NYIFF this year. That is a win already. But 'Mrs. Scooter' is not in New York to just win any trophy. I believe it will certainly win some desi and firangi hearts," Moulik said in a statement.

Aseem Chhabra, NYIFF festival director, has personally picked the film for the festival's consideration from the NFDC Film Bazaar at the International Film Festival of India in Goa during November 2013.

The film, co-produced by S2S Productions and Neon Light Pictures, is based in a small town in western Uttar Pradesh. It narrates the story of love and resilience of a bride and a scooter, caught in the midst of a difficult social situation.

"The story is timeless and I sincerely hope that the Indians and American viewers enjoy it alike," the director added.

"Mrs. Scooter" has power-packed performances by acclaimed actress Anjali Patil, and it also features Satyakam Anand as well as talents picked from the National School of Drama alumni.

The screenplay stemmed from an idea suggested by Moulik's colleague Deepak Nagar.

"Mrs. Scooter" will be screened May 9.