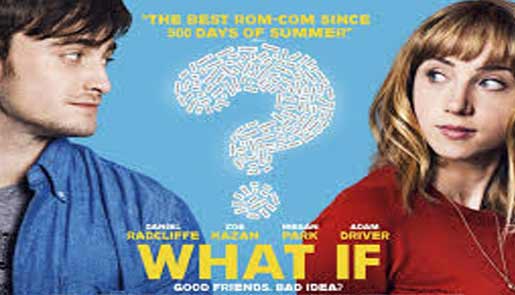 What happens when a heartbroken, asocial, medical school dropout meets an easy-going, young girl who has a good love life and a long distance boyfriend?

The outcome is but obvious.

From opting to being good friends and being in a platonic relationship, their "let's hangout" friendship blossoms into love, which both are somewhat confused about and scared to admit.

The story of this frivolous rom-com truly does not progress much by way of unfolding and offering anything new for the viewer in the 90 odd minutes of screen time. It merely revolves around the chance and planned meetings of the duo.

The humour, if any, comes in the form of some amusing dialogues. Wallace's best friend Allan (Adam Driver) and his obsession with sex, his whirlwind wedding with his girlfriend, Nicole (Mackenzie Davis), their sexapades, and Chantry and Wallace's fascination for Elvis Presley's dietary habits -- are other forced attempts to boost the otherwise drab script.

Radcliffe's performance is as lacklustre as his character Wallace. It is the effervescent and vulnerable, Zoe Kazan who delivers an honest performance which somewhat salvages the otherwise mediocre film. Adam Driver portrays the sex-obsessed Allan with conviction, while Rafe Spall as the righteous Ben is an-oft seen flat character.

The expected undercurrents of sexual tension between the couple are palpable, especially in the changing room scene where Wallace helps Chantry who is entangled while trying out a dress. But given the platonic nature of their friendship and the unadventurous character that Radcliffe plays, no lines are crossed.

Director Michael Dowse obviously believes in love and perhaps had a modern fairy tale in mind. He tries hard to convince the viewer, through Wallace and Chantry, but fails to, owing to a shoddy and weak script written by Elan Mastai which is adapted from T.J. Dawe and Michael Rinaldi's play, "Toothpaste and Cigars".

The amateurish camera work and poor lighting don't elevate the viewing experience either. The production values of the film are ordinary.

"When you know everything is going to fall apart, you don't give up what is good" clearly reaffirms Dowse's positive beliefs. But one cannot vouch for certain that the viewer is convinced of this type of love.

"What If" fails to live up to the element of surprise that the title suggests. It does not strike an emotional chord either. This film clearly leaves you wanting for more.