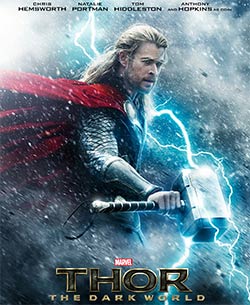 Director Alan Taylor's "Thor: The Dark World" is a Marvel Comics franchise based on Norse Mythology, where Thor is the hammer-wielding protector of mankind, who uncompromisingly pursues his foes.

Action-packed and visually dynamic, the film at times feels like a sci-fi war movie. But instead, it reverberates with family dynamics in mystical realms and numerous characters. Unlike its first installment, this one is on a much bigger scale and a far cry from a superhero film.

The film structurally begins in the same way as the first "Thor", with a voiceover by Anthony Hopkins, who plays Odin the ruler of Asgard, and a back story.

The voiceover states: "Long before the birth of light, there was darkness and Dark Elves ruled the universe with the help of aether (pronounced eether) an ancient force of eternal destruction."

The back story reveals Malekith (Christopher Eccleston), the Prince of the Dark Elves is all set to destroy the Universe, but his attempt is thwarted by Thor's grandfather and the Aether is discarded onto a planet.

Years later, on earth, the aether enters the bloodstream of astrophysicist Jane Foster (Natalie Portman) and there are forces at work. Malekeith is back on the prowl. Jane gets connected with her long lost love Thor (Chris Hemsworth) and Loki (Tom Hiddleston) the less trustworthy brother of Thor, accompanies him to save the day. This makes the core theme of the story.

And if this sounds interesting, then the film is far from the point of deliverance. Its first half drags quite mercilessly. Then the plot gets complex and convoluted. The tale is saddled with intergalactic setting and the narration has twisted and knotted moments. If one sequence begins on Asgard the planet where Thor and his family live, the other sequence takes place on Earth and the third, in space. After a while, teleportation is commonplace and anything is possible.

Overall, the characters have no graphs or novelty factor. The dialogues, without any verve and wit are full of cliches, thereby making the viewing boring and predictable. The film borders on patronizing with the same old threats of galaxy extinction and out-of-context jokes.

Humour comes in the form of Jane trying to fix a long distance blind date with a prospective new boyfriend, a cameo played by Chris O'Dowd and other times by static one-liners from Kat Dennings, Jane's intern. But the most forced humour is witnessed when Stellan Skarsgard as the eccentric physicist Dr. Erik Selvig struts about nude or in his underwear to help him "think".

Though the film has a star studded cast and they share a comfortable onscreen chemistry, there is nothing that holds them together. Chris Hemsworth as Thor manages to add charm and power to the role. But it is Hiddleston as Loki, who steals the show with his grey and enigmatic character. Natalie Portman as Jane Foster is convincing.

The villainous Malekith is a not so potent, generic villain and Christopher Eccleston who plays Malekith adds nothing more than scowling guttural threats in a made-up language for much of the movie. Anthony Hopkins as Odin the one eyed king is ineffective as his scope in the film is limited.

Technically, Alan Taylor has spared no effort to make "Thor: The Dark World" appealing. The production values are excellent. Visually, the frames with warm lighting are action-packed with computer generated images and aesthetic value. Unfortunately, there is no added value to watch this film in 3D.

In reality, "Thor: The Dark World" seems to suffer from superhero fatigue.

Trending: The Wait For Dark Season 3 on Netflix Has Everyone ...