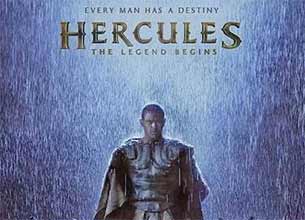 "The Legend of Hercules" is a perfect example of how too many cooks spoil the broth! With four writers credited with the script, one would expect a perfect piece of entertainment. But instead, what you get is a cauldron of insipid, generic and lacklustre entertainment!

Apart from the sheer opulence of a period drama, director Renny Harlin's "The Legend of Hercules" is a shallow re-imaging of the mythological Greek hero Hercules, the son of Zeus.

The film begins on the outskirts of Argos in circa 1200 BC, where two warring commanders indulge in a one-to-one battle in order to avoid bloodshed, a voiceover reveals: "A victorious war is a chronicle of grief," and indeed it is.

The inciting moment of the tale is when, Queen Alcmene realises that her husband, King Amphitryon, "the slayer of kings", blinded with greed, is not only ambitious, but also dangerous. She appeals to goddess Hera for a solution to stop the king's madness.

The goddess appears before her and grants her a boon. A child of Zeus born through her would save the land from the hands of the evil king. He would be named Hercules.

Amphitryon, who is aware that Hercules is not his son, ill-treats him.

Twenty years later, Amphitryon plots to kill Hercules when he is on an expedition to Egypt after he realises that Hercules is in love with Princess Hebe, who is already promised to his son Iphicles, the heir apparent.

Hercules along with Sotiris the commander of the mission, survive and are sold off as slaves. They end up as gladiators before returning to Greece to start a revolt against Amphitryon.

Kellan Lutz makes a charming Hercules. Apart from him being macho and fearless, the script does not permit him to display much of an emotional graph. He oscillates from being a timid brother and obedient son to a caring and understanding friend and leader.

Scott Adkins as Amphitryon matches Lutz in performance and stature.

Roxanne McKee as Queen Alcmene, Liam McIntyre as the brave commander and loving father Sotiris along with Liam Garrigan as the devious and conniving Iphicles are strikingly impressive in their roles.

Gaia Weiss as Princess Hebe is pretty stiff whereas Rade Serbedzija as Chiron, the priest, is wasted.

The sets are massive and recreate an authentic look and feel of the era. The costumes designed by Sonu Mishra are imposing and remarkably striking. It is the best thing in the film, which gets an extra star in the ratings.

On the surface, Renny Harlin's "The Legend of Hercules" has all the ingredients to be a mega blockbuster, but unfortunately, the film is formulaic and lacks consistency in texture and tonal qualities. That's because the director has made generous use of scenes and situations from famous films especially, "Ben- Hur", "Gladiator", "Spartacus", "Iron Man 2" and "300".

Also, the performance of every actor is perfect individually, but there is no synergy between the main actors and stock characters making the film look absurd at times.

Similarly visual compositions are uneven and erratic. The computer-generated images, particularly the animated Lion and the often shown full moon, are substandard.

Overall this 99 minutes saga is fast paced that never pauses for a breather, but leaves you gasping for some meaningful cinema.