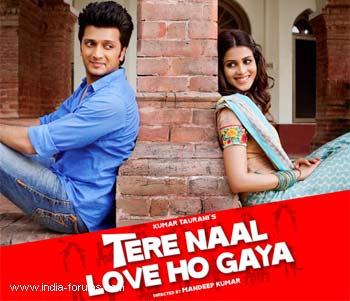 Some love stories are just so sweet, more so, when real life couples romance on reel. 'Tere Naal Love Ho Gaya' is one of those. No extraordinary story or no unique formula, no major histrionics, yet, this romantic-comedy entertains and touches your heart.

Mini (Genelia D'Souza) is an educated, fun-loving daughter of businessman, Bhatti (Tinnu Anand), who wants to marry her off to a rich jaat, Sunny, who in turn wants the permit Mini holds as his entry into 'Caneda' aka Canada.

But the feisty Mini, who loves life and adventure, will have none of that.

Viren (Riteish Deshmukh), who drives Bhatti's rickshaw, is a simpleton with dreams of starting a travel agency with a fleet of cars for which he is painstakingly saving money.

Bhatti sells off all his rickshaws one day with Viren's savings of Rs.60,000 in it. Egged on by his friends to drown his sorrows, Viren guzzles a few drinks and in a drunken stupor lands up at Bhatti's doorstep demanding his money back, while Mini's engagement is in progress. 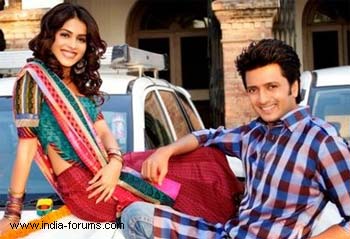 An argument ensues and Viren lays his hands on a pistol. In the commotion, Mini seizes the opportunity and forces Viren to kidnap her and makes him drive them off in the waiting vehicle.

The spunky Mini makes a deal with Viren that he will follow her instructions and will demand a ransom of Rs.10 lakh from her father. He can then have his Rs.60,000 and she will keep the rest as she does not want to go back home and marry.

While the ransom letter goes to Mini's father, the couple enter into someone's home and try to make ends meet. In the process, they fall in love and are happy being with each other.

The story takes a twist when Mini's fiance along with her father comes to pay the ransom amount but actually fools them and starts firing, hoping to take Mini back.

Suddenly, Mini and Viren are kidnapped by another person and taken away to the Chowdhary's haveli.

Chowdhary (Om Puri) is a notorious kidnapping kingpin, who makes a living out of demanding ransom. Just when you think Puri is a villain of sorts and some never-ending torture drama a la 1980's Hindi films, will unfold, we discover that Viren alias 'chotu' is Om Puri and Smita Jayakar's son. 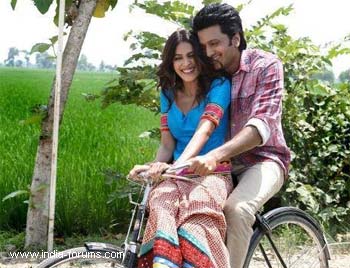 Disapproving of his father's ways, Viren has left home six years ago to work in Patiala as a rickshaw driver.

Follow your heart and not your head when you watch this comedy directed by debutant Mandeep Kumar. The sincere effort to make a light hearted, fun, love story shines through.

Genelia as the spirited Mini is adorable and delivers an energetic performance. She looks fresh, gorgeous and does full justice to Mini's insanities and pranks. Riteish plays Viren to the hilt. He is earnest, restrained, but you have seen him do this before.

The duo lights up the screen with their palpable, but understated chemistry. Tinnu Anand and Om Puri expectedly deliver good performances.

Enjoy watching a sweet love story with the now Mr & Mrs Deshmukh as the lead pair. Trust me, it is entertaining enough.