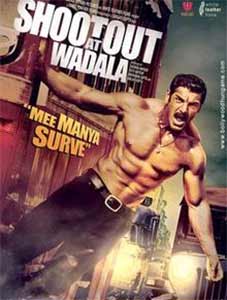 Babli is not the only one who's a badmaash here. The characters are all hardened players of the underworld from the 1970s. They all mean business in the business of being mean.

They sport the right clothes dialogues and attitude.

Yes, the detailing is deft.

Everyone speaks as if they are reading out a copywriter's wisdom from billboards and hoardings. Everyone is a smart ass in this film.

Take a character with an unmentionable name, played with energetic fervour by debutant Siddhant Kapoor. At some point in the trigger-happy proceedings he explains why if he was Shah Jahan he would have built the Qutub Minar instead of the Taj Mahal.

"Because it's so old and yet it stands so erect!" 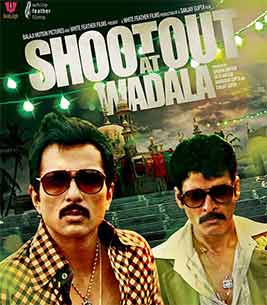 Ahem. Here's to the celebration of phallic freedom. The men in Sanjay Gupta's film are actually boys who never grew up. They fight, scream, throw tantrums and draw blood when all fails. These are attention-seekers whose moms should have delivered solid spankings during their childhood.

This is director Sanjay Gupta's return to direction after a longish hiatus. He is in a tearing hurry to sweep us into the vortex of his violent kingdom.

Mumbai as seen through Gupta's expertly sketched images, is a kingdom of the damned. Men pull put guns and knives as the background music (by Amar Mohile) settles scores. Tempers run high. The body-count matches the exacerbated emotions.

To his credit, Gupta knows this world of internecine wars as minutely as Coppola knew his Sicily. The mood in the cat-and-mouse game is forever defiant and belligerent.

There's no room for dull moments in Gupta's storytelling. The cat and-mouse game tends to get breathless but never wheezy even when characters such as the one played by Manoj Bajpai splutter to a gruesome end.

Gupta keeps a firm grip on the proceedings on his out-of-control characters, all played by actors who understand the close link between oppression and violence. 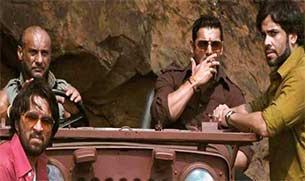 "Shootout At Wadala" reminded me of two recent films - Karan Malhotra's "Agneepath" and Anurag Kashyap's "Gangs Of Wasseypur" where the law of the lawless prevails.

A great deal of thought has gone into creating a mood of anarchy. Every frame is saturated with colours and atmospherics. Almost every frame and dialogue is darkly underlined and emphatically italicized. There is no room for thought, let alone silence, in the narration. And why should there be, when the characters pull out their guns faster than John Wayne and Clint Eastwood did in the Wild West?

The performances reflect the absence of a moral equilibrium in the lives of the characters. While Anil Kapoor makes his 'encounter cop' a combination of the quirky and the kinetic, John Abraham in the author-backed central role tries very hard to remain in character. Going shirtless on a BEST bus in the bustle of Mumbai in the early 1970s is perhaps his idea of being in character. Wonder what the real Manya Surve would think of being in a body that unmistakably belongs to another millennium! 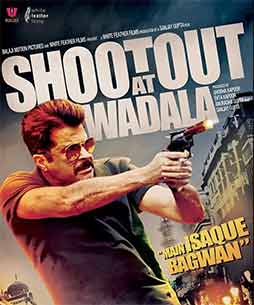 As usual Gupta invests a lot of time and attention to the images of violence. Shootouts and flare-ups in various public spots of Mumbai are shot with the arresting impunity of a storyteller who is profoundly fascinated by the violence that underscores suburban life.

Except for Manya Surve's anxious and physical love interest (played by Kangna who looks annoyed throughout as though she wasn't happy being in her character's space), we hardly ever see the characters in their domestic space.

Do these killers and cops ever sleep? "Shootout At Wadala" is a bludgeoning saga of bloodshed, vendetta and ricocheting nemesis peppered with picturesque dialogues and episodes of frenetic aggression.

This is Gupta's big-ticket comeback. The sound and fury certainly signify something significant in the history of gangsterism in our cinema.