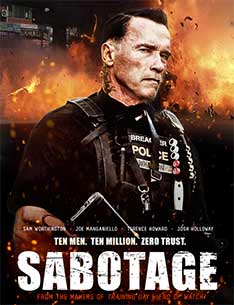 What happens when "the best undercover cops of the Drugs Enforcement Administration (DEA)" turn into crooks and are then eliminated one by one? Who is the killer, forms the crux of the action mystery thriller "Sabotage".

The film begins with a Mexican drug lord torturing DEA Agent John "Breacher" Wharton's wife, daughter and son. The three of them are then executed and the deed is recorded on a shaky handy-cam.

During the operation, the team stumbles upon 10 million dollars that belong to the cartel. And instead of playing straight, they decide to usurp the bounty. So they steal and hide the money.

But when they go to retrieve the loot, it is missing. It is obvious that it is an insider job for, "no one else knew about the cash." The team disintegrates. Smoke is killed, followed by another team member.

Each death is more horrific than the previous one. The others are petrified. Though on the face of it the team is like a family, they are now "just a gang, there is no trust" among them.

Caroline Brentwood (Olivia Williams) joins Breacher as the investigator and adds a tinge of romance to the otherwise overtly serious and gruesome tale.

With fair enough production values, the actors deliver their part reflexively. Arnold is seen in the muscle flexing team leader avatar often. He adds neither charisma nor grace to his character. Instead, he is an eyesore.

Olivia Williams as Caroline aids as the femme fatale and Mireille Enos excels as one of the boys.

Visually, cinematographer Bruce McCleery's establishing locale shots as well as the action scenes are well captured. And the lighting used in Arnolds' cigar chewing profile gives a very dramatic tone to the frame.

Since the film uses non-chronological storytelling, there are instances when Dody Dorn's editing gets confusing. This is evident in the montage when Breacher and Caroline try to reach Tripod and his assailants kill him.

Apart from this, the film is loaded with repetitive shots especially those of the cautious DEA Agents, holding their guns and posing right for an attack, making the dramatic tension wearisome.

The script written by Skips Wood and David Ayer seems to lack originality. Loosely based on the plot of Agatha Christie's novel "And Then There Were None", the film includes features of "Predator", where Arnold tries to prevent his men from being killed by a mystery assailant.

Surely, detailing and logic is not taken into consideration and the narration rambles off mechanically and carelessly to a predictable climax.

Overall, "Sabotage" with large chunks of gore does not stimulate your mood as a thriller.

Himanshi Khurana Tests Positive For COVID-19
a minute ago

Aditya Chopra Pens a Heartfelt Note on '50 years of Yash Raj ...
19 minutes ago