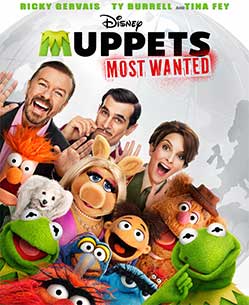 At the very outset of this musical extravaganza you are warned, "We are doing a sequel and everyone knows that sequels aren't quite good". You could either take this literally or with a pinch of salt.

Either way, the film is a mediocre fare, punctuated with run-of-the-mill gigs and sparkles that are aimless and trying hard to please.

After the 2011-release "The Muppets", it is impossible not to enjoy the return of Kermit, Fozzie Bear, Miss Piggy, Animal et al. These characters are charming and it is really a pleasure seeing the entire old gang reunited.

"Muppets Most Wanted" starts from where it left in the earlier edition. Although they are more popular, Kermit and friends have no idea what their next movie should be. So after quickly brainstorming and rejecting various takes on old classics including, "Gonzo With The Wind", they decide to embark on a lavish world tour.

Soon, they naively and unsuspectingly sign up with a shady and smooth-talking talent manager Dominic Badguy (Ricky Gervais), pronounced "Bad-JEE" in French and embark on the ill-rehearsed European tour, by train, little realising that their act is a mere front for a series of heists engineered by Kermit lookalike, the devious Constantine, who escapes from a heavily guarded remote Siberian prison called Gulag.

Their first performance is in Berlin. Here the overtly cautious Kermit objects to some of Domnic's outlandish ideas, such as renting out the largest theatre in Berlin for their opening night performance. But the other Muppets increasingly side with Dominic over their frog leader, who's already stressed out enough by Miss Piggy's plan to use the tour as a setting for their wedding and honeymoon, none of which Kermit has ever agreed upon.

What follows is a case of mistaken identity, with Kermit hauled off to the remote Siberian prison, ruled by the spirited Broadway obsessed warden Nadya (Tina Fey). Meanwhile, Konstantin gives the baffled Muppets a free rein over their show in Madrid, Dublin and London, which ends in amusingly catastrophic results.

The "my badge is bigger than yours" scene between buddy-cop Jean Pierre Napolean (Ty Burrell) and Sam the Eagle is distinctly funny and it would appeal to children.

Also Miss Piggy's flamingo-assisted "Macarena" rendition juxtaposed with singer Celine Dion in a moment of crisis is a crisis by itself. The vocal pairing of the two divas is comical.

What's more, apart from celebrities in cameos like Salma Hayek, Ray Liotta and Celine Dion, who have some determined roles, the rest like James McAvoy, Tom Hiddleston, Saoirse Ronan and Chloe Grace Moretz have blink-and-you-miss-it appearances.

The soft fabric characters are loveable on their own and the humans are passable, but together their chemistry is rather weak.

Director James Bobin, who has co-scripted the film, fails to infuse sincerity in the narration.

Here the plot with the heist drama is outdated and unappealing. Moreover, loaded with cinematic liberties, the entire experience seems a farce.

Overall, the film offers loads of mild chuckles and fails to knock viewers off their feet.