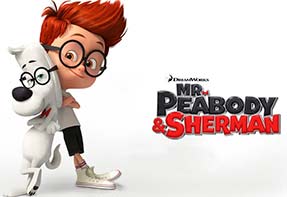 Based on the 1959 US four-and-a-half minute broadcast skits, "Peabody's Improbable History", the film is a father-son bonding adventure film laced with history and time-travel.

From the stable of Rob Minkoff, who had earlier directed "Stuart Little" and "The Lion King", "Mr. Peabody and Sherman" is a light-hearted emotionally manipulative film where a super-intelligent talking dog adopts a boy, rears him and educates him in a unique manner on how important events actually happened.

The first twenty minutes of the film explain how, through a judicial precedent of a cross-species adoption, Mr. Peabody (Ty Burrell), a highly intelligent, multi-faceted dog, gets to father the orphan human Sherman (Max Charles).

It is also revealed that Mr. Peabody has invented a time machine, WABAC, which is pronounced, "way back". He uses this machine to educate his son, through first-hand experience about historical events that happened over the years.

But trouble begins when Sherman starts attending school. Though he is bright and brilliant, he is taunted by a spiteful intimidator, Penny Paterson (Ariel Winter). In retaliation to the bullying, he bites her. The matter escalates. The parents are called and a social worker, Miss Gruinion (Allison Janney) is put on the case.

The inciting moment of the film turns out when Miss Gruinion questions, "What kind of a father can a dog be to a boy?"

Rude and obtuse, she pursues the case with the intention of withdrawing all parental rights from Mr. Peabody.

In order to smooth things out, Mr. Peabody invites Penny and her parents (Leslie Mann and Stephen Colbert) for dinner. While Mr. Peabody engages with the parents, he lets Sherman iron out his differences with Penny.

In a moment of one-upmanship, Sherman disobeys his dad and uses the WABAC to prove his point of how he knows that George Washington never chopped down a cherry tree.

What follows is a series of adventures through history, that starts in ancient Egypt with Penny getting betrothed to nine-year-old tyrant King Tut (Zach Callison), and carries on through encounters with Leonardo Da Vinci (Stanley Tucci), and Agamemnon (Patrick Warburton) on the eve of the sacking of Troy, and the Marie Antoinette sequence amongst others.

The voices of the star cast aptly suit the characters. Their versatile modulation and intonation makes the characters very appealing. What further boosts the viewing experience are the witty dialogues. They are filled with puns and punchlines galore. The plot competently balances between child-friendly pranks and contemporary gags aimed at grownups.

There is enough sparkle and warmth in the background score, and the number "Beautiful Beautiful boy" is well-placed in the film.

Visually, the animation and 3D effects are good but not outstanding. There is a balance in the retro and modern design elements. The huge-headed characters with basic features and facial expressions are enhanced with lighting and super rich colours. Loaded with characters from history, you would be able to spot Mahatma Gandhi too, in one of the frames.

All in all, the film takes off on a promising premise, but eventually saddles on a disappointing plateau. But nevertheless, it is an uncomplicated film that would appeal to kids and adults alike.

The film would strongly appeal to intelligent kids, their parents and dog lovers, who have a sense of humour.