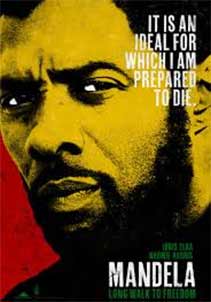 Based on Nelson Mandela's 1995 eponymous autobiography, the film showcases snatches of Mandela's life in an episodic-cum-documentary manner - as a lawyer, anti-apartheid revolutionary, politician-cum-activist who was elected the president of South Africa in 1994.

What the film misses out is his third marriage to Graca Machel and his last days.

Laden with dramatically cliched and generic rousing scenes, director Justin Chadwick's "Mandela: Long Walk To Freedom", set against the backdrop of long-established institutional racism, is a far cry from an awe-inspiring and stimulating biopic.

It gives an insight into Mandela's persona not as a hero, but as an ordinary man who is capable of succumbing to lust. The film also showcases the history of South African freedom struggle against apartheid.

"I dream the same dream, night after night. I am coming back home to Orlando... they seem fine getting along with their lives, but they do not see me..." a recurring voiceover bookmarks the film that begins with a montage of kids playing in the wilderness of the golden hued South Africa summer.

A little while later, again in a voiceover, Mandela explains why his father named him, 'Rolihlahla'. "My father called me a trouble maker... but I wanted to make my family proud," he says defending himself.

Then the narration skips to Johannesburg 1942 to give a glimpse of him as a shrewd and ambitious lawyer. The scene starts off dramatically showing him as a sought after lawyer. And to support his claim, the following scene shows him brazenly defending his client, accused of stealing her mistress's undergarments. This jocular scene definitely boosts the spirit of the narration but unfortunately immediately after this, the film just plateaus.

Usually the best biopics tend to be those which use unremarkable moments to showcase why that person was remarkable. "Mandela: Long Walk To Freedom" has these elements, but unfortunately the passion in portraying it is missing.

For instance, Mandela's entry into politics, one of the earliest milestones in his life, is justified by a single scene where a drunken black is killed in police custody, after which Mandela lands up burning his identity papers and making revolutionary speeches at public places.

What it fails to reflect is Mandela's angst, considering he is not strong morally towards his wife and kids.

But once he is in prison, it is Winnie's story that keeps the audience glued.

Idris Elba does a sterling job as Mandela. His transition from a young man to an octogenarian is let down only once or twice by prosthetics but otherwise he is pretty convincing. He impersonates Mandela's walk and speech to perfection.

Naomie Harris as Winnie is intense and dazzling. It is a delight to watch her as the complicated and controversial Mrs. Mandela, who was thrown into politics by circumstances, doing the unfinished work of her husband while he was in prison. The tone of her character does get tilted in favour of Nelson Mandela, thereby not giving a true picture of their interpersonal relationship.

The film, shot in real location, is symbolic of director Chadwick's overall approach. He portrays the unrest in predictable fashion with montages of newsreel material showing fighting on the streets to music from Bob Marley and Public Enemy. There is also BBC's footage of the Nelson Mandela's 70th birthday tribute concert, staged at Wembley in 1988 and broadcast around the world.

Overall, the film pays homage to this extraordinary man but lacks the emotional drive to make him iconic on screen.