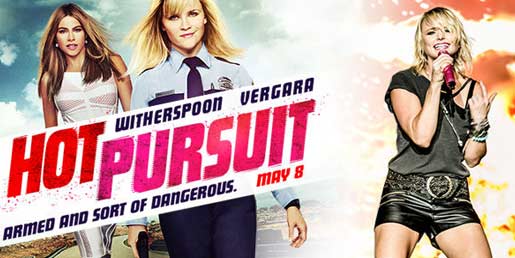 Packed with impulsive situations, "Hot Pursuit" is an engaging, mainstream Hollywood comic caper with an overall feel good effect, but it's not effective.

The film begins with a brief detailing of Cooper's character. She is a firecracker who scares off her dates and colleagues with her intense personality. But because of her sincerity and sticking by the books attitude, she is assigned to escort Daniella, to Dallas to testify against a Drug mafia Vincente Cortez (Joaquin Cosio).

The tale gathers momentum after the shootout at the Riva's villa, where Daniella's husband gets killed. As the duo drive away in the Rivas' classic Cadillac convertible, they figure out that they've been targeted not only by vicious mobsters but by the "bad" and "good" police too. So, with no one but each other to lean on, the officer and outlaw grudgingly join forces to survive the drive to a safe sanctuary in Dallas.

There is no story! And the plot is simple and silly. Prudes may feel it is below their dignity to laugh at the mindless situations that offer lighter moments to life. But don't moments like these that make life memorable and grant you a chuckle? "Hot Pursuit" offers plenty of such moments which begins with; the young Cooper's reaction to a transsexual in her father's patrol car, followed by her chasing her date, then her reckless act of attacking an unarmed student, the list goes on.

The script may sound frivolous with strands found in various films like, "Midnight Run", "48 Hrs" and "The Squeeze". And the characters don't rise beyond their pigeon holed graphs. But it is their performance, however ridiculous they are, that keeps you hooked.

Reese Witherspoon as the no-nonsense Cooper is a huge contrast from any of her previous characters and she is a pleasant surprise. She clearly has some fun playing the constantly chattering policewoman with a masculine gait.

Vergara on the other hand as the sassy, spirited Latino lady, fixated about her age and who lugs around a suitcase full of jewel-encrusted shoes is superb too. Together, they make an interesting, mismatched, screen pair with powerful over-the-top performances, projecting stereotype characters.

The rest of the supporting cast have nothing much to do nor do they register except for Robert Kazinsky, who plays Rose's Love interest. He has a meaningful rounded character graph that makes you root for him.

Technically with its modest cinematography, fine edits and good production value the film is above average.

Director Anne Fletcher who had earlier delivered "Step Up", "27 Dresses", "The Proposal" and "Guilt Trip" has this time delivered a no-brainer that fails to break cinematic ground but certainly provides ample laughs.

A must watch this weekend.