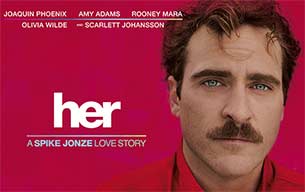 "Her", a Warner Bros produced movie, released under the PVR Director's Rare Banner, is a futuristic romance tale. With a tinge of sci-fi, this cyber-romance fiction exposes the human traits of self-realization, acceptance and growth of lonely singles of this generation.

The story is set in a time frame not too far from occurrence in Los Angeles, where everyone seems content in their world yet oddly detached, forever in private conference with their phones and gadgets. It seems like any world we know.

The film begins with a dramatic close-up of Theodore Twombly (Joaquin Phoenix) reading a letter he has just written. The letter, sensitive and compassionate, gives a glimpse of his art as a letter writer, composing bespoke intimate letters for others. He's so good at his work that his colleague (Chris Pratt) constantly compliments him.

But unfortunately, he has a crisis in his personal life. He is on the verge of a divorce from his wife Catherine (Rooney Mara) and he is heard lamenting, "Since my break-up, I've not been enjoying my writing".

So he spends much of his time at home interfacing with 3D video games.

One fine day he gets a new operating system OS1, with a self-programming software for his computer. This software responds to the user's personality and needs.

So after installing a female version, the software materializes as Samantha with a lifelike consciousness and spontaneity. She has a seductive voice and speaks in the husky, coquettish or sweetly amused tones of Scarlett Johansson. She is the perfect tool for any lonely guy.

Connected to his mobile phone, all Theodore needs to speak to Samantha, is a small earpiece. He often converses while walking through the city sky-walks, on the subway, by the beach, later on a fast train and hiking through a forest.

With Theodore's obsessive interaction with Samantha, an intimate rapport comes into being between this strange couple: a real, visible man and an invisible woman, both reacting with delight and surprise to each other's possibilities.

The film contests not only our dependence on our devices, but also the conservative wisdom that this dependence makes us worse people. Theodore's relationship with Samantha paradoxically makes him an improved individual around his fellow humans.

Phoenix is an extraordinary actor who brings depth and sympathy to a role that requires him to bounce off in empty spaces acting all alone most of the time. His reactions to Scarlett Johansson's well-modulated voice are awe-inspiring.

The supporting cast also includes Amy Adams as Theodore's longtime friend who, rather too conveniently, is also going through a romantic separation. Olivia Wilde in a tiny role as a blind date is utterly wasted.

The production quality of the film is above average and the cinematography by Hoyte Van Hoytema is worth a mention. He beautifully captures Theodore in all angles and emotions, static or in motion. Unfortunately the setting throws you off balance as the story is said to be based in Los Angeles, but the visuals with Pan Asian visages make you wonder if you are in china town part of LA.

Director Jonze's writing really tackles what people want out of love and relationships. Despite its humour and weird comedy, the original screenplay with an absurdly, bordering on the bizarre premise, is intriguing and engaging up to a point. Unfortunately, the story is forced and too convenient. Also the fact that it slowly dissipates into a cliched self-realization theme kills the oomph factor of the film.

Nevertheless, "Her" is one of cinema's most affecting and heartfelt romances in modern times. It is worth a onetime viewing for its original concept and brilliant performances.