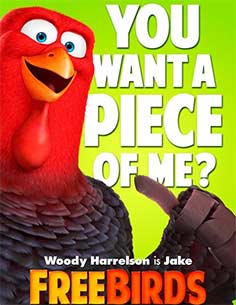 "Free Birds" is an animated, Thanksgiving themed time-travel adventure film. It is the story of the first Thanksgiving meal from the perspective of the turkeys and their desperate attempt to get the first Turkey, off the thanksgiving menu.

A few days before Thanksgiving, the plot follows Reggie (voiced by Owen Wilson), a smart and inquisitive turkey, who fathoms why he and his buddies are fed so much corn every day. He warns his brethren that the 'turkey paradise' that they long for is in reality their doomsday and "Thanksgiving is the worst nightmare as many of them get slaughtered to land up as the main course meal."

Miffed with this revelation about their imminent demise, fellow turkeys throw Reggie out of the pen. But destiny has something else in store for him. He lands up being the annual ritual- "pardoned turkey" after being taken fancy to, by the president's daughter. Under her patronage, Reggie leads a luxurious life eating pizzas and watching mushy television shows.

But soon a delusional and gung-ho Jake (voiced by Woody Harrelson), claiming to be the lone-wolf of the TFF (Turkey Freedom Front) kidnaps Reggie and forces him into a mission of travelling back in time to Plymouth Colony in 1621, just before the first Thanksgiving, to keep turkeys off the menu and save his brethren for all eternity.

This, Jake claims was entrusted upon him by the Great Turkey.

With the help of a time machine code name Steve (voiced by George Takei), Reggie and Jake reach their destination. But when they reach there, they find themselves being hunted by Myles Standish (voiced by Colm Meaney) who is gathering as many turkeys as possible to feed the starving colonist and local Native Americans for their upcoming feast.

It is during this endeavour that Reggie and Jake come in contact with Jenny (voiced by Amy Poehler) and her father Chief Broadbeak (voiced by Keith David) and the four unite with a clear understanding that, "We do not fight. We defend, protect and survive."

With the possibility of death lurking at the back of the characters' minds, the film is positively not very lively. Also, nothing in this complex and convoluted narrative is ever particularly thrilling or funny. The outrageously blunt dialogues tend to create humour. The romance that forms between Reggie and Jenny is insipid and uninspired. The over emotional family drama at the end seems forced and worst of all, "Free Birds", which starts of by saying "loosely based on historical events", insensitively further depicts the turkey slayings as a metaphor for the cruelties the Native Americans have suffered.

The voices lent by the star cast suit the characters to perfection. The animation too is near perfect, given the subject. The visuals too are adequately vibrant. The lone tree on the cliff is so reminiscent of the bird kingdom of "Zambezia", which was released in the first week of August. But unlike in "Zambezia", this tree shown in silhouette was withered and wasted.

Director and co-writer Jimmy Hayward's attempt at "Free Birds" seems like a cobbled up project in terms of theme, tropes and satire.

The story and characters are mostly conventional and boring. The 3D effects did not add to the charm of the film. However, the film may appeal to the younger audience.

Overall, the film lacks the free spirit of 'free birds'.

I do yoga, free hand workout and meditation- Gurpreet Singh

Aditya Chopra Pens a Heartfelt Note on '50 years of Yash Raj ...
11 minutes ago

Never thought I would be dancing, I was preparing to be an ...
20 hours ago