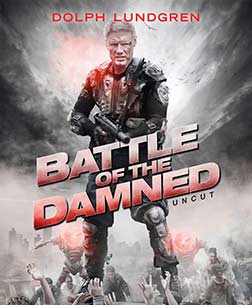 To watch "Battle of the Damned" is like rotting in hell with zombies, killer robots, obtuse-damned survivors and an overdose of innate absurdity that is prevalent in the film.

The film begins with a 15-minute prologue that seems to be detached from the film. It is revealed that Army Major Max Gatling (Dolph Lundgren) is dispatched by a desperate rich and influential man, head of a biotech company, to rescue his daughter Jude (Melanie Zanetti) from a zombie-infested city.

No sooner has Jude's father delivered the necessary exposition to tell the audience exactly why Max is the man for the job, Gatling and his men are being relentlessly chased through the city's ravaged streets by the infected and they are gradually eliminated one by one. Max quickly becomes the lone survivor who decides to stay put in the city alone to finish the job he was hired for.

This sequence is worth mentioning not because it tells us something about Max, but because it all happens before the film's title sequence. This also would give you a fair idea of how writer-director Christopher Hatton handles the concept of pacing.

Soon, after the titles roll off, Gatling while wandering in the city meets Jude by chance. She introduces him to Duke (David Field), Reese (Matt Doran), Elvis, Anna and Lin, who managed to survive the plague largely because they've taken refuge in a large palatial house that is fenced.

The megalomaniac Duke, who looks like and quotes Charles Dickens, captains this group of survivors. He is wary of Max's intentions. To add to the drama, there is an interpersonal equation between the survivors that balances the plot, which ends on a formulaic note, without a zing.

On the acting front, Lundgren is stiff and mechanical in this substandard genre horror film. Apart from the regular action scenes, he is seen fighting the zombies while handcuffed to a street light pole. One feels sorry for him when you realise that at 60 he is still pushing himself doings stunts that are hard to digest. And ironically, this is the only scene that stands out in the film.

Melanie Zanetti displays the spunk required for the character she portrays. But the script is too insipid that makes her dispensable. Matt Damon too as Jude's boyfriend Reese is wasted and the rest of the cast are all stock characters playing their parts perfunctorily.

With the production quality below par, visually the film is pathetic. For what is essentially a zombie movie, it is pretty light in the gore department.

On the writing front, there are several unanswered questions and major plot-holes that need to be filled. The arc of each character is vague and undefined especially Reese's. The dialogues too are limp, weird and, at times, unintentionally funny.

Overall "Battle of the Damned" can be strictly avoided, as it seems like a long drawn trailer of a hackneyed zombie film with no flesh!