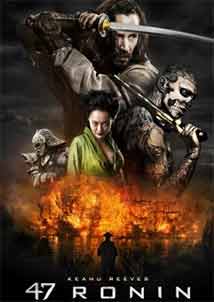 What starts off as an action-packed Samurai adventure thriller, slowly fizzles into a tragic Japanese period drama sprinkled with ounces of fantasy in the guise of witchcraft and sorcery.

The film pays homage to the legendary 47 Ronin, who according to folklore, in the 17th century wreaked a terrible vengeance on the official who had unjustly condemned their Lord Asano Naganori to death. They then placed the severed head of their enemy on the grave of their lord and stoically submitted themselves to their punishment - seppuku or hara-kiri, the ritual suicide by disembowelment.

This tragedy has been one of the most popular themes in Japanese art, and has a variety of versions. Director Carl Rinsch's "47 Ronin" is the Hollywood version of this story.

Set in the ancient feudal period, the film begins with explaining the system in Japan, where the role of a Samurai is to "protect his master and maintain peace in the land and a person who fails to protect his master, becomes a Ronin."

The narration transports the viewer to Ako, where Lord Asano Naganori (Min Tanaka) along with his Samurais is exploring his land. They chance upon an orphan Kai (Keanu Reeves) in the jungle. Kai is brought to the palace to live with Asano and his family.

Over a period of time, Kai charms Asano's daughter Mika (Kou Shibasaki). But since Kai possesses mystical and supernatural powers, he is termed as a half breed and is discarded to live on his own as an outcast. His true lineage is meant to be mysterious, but later it is hinted that he is the offspring of a demon monk and a peasant mother.

There is a constant undercurrent of hatred by Asano's Samurais towards Kai. During an attack by a monstrous beast, Kai saves the life of a Samurai, but instead of being appreciative of Kai's action, the Samurai swears, "I'd rather be killed by the beast than be saved by a half breed."

A rivalry with the scheming Lord Kira (Tadanobu Asano) leads to Asano being manipulated by witchcraft to attack Kira. Kira's wound was hardly serious, but the attack on a shogunate official within the boundaries of the shogun's residence is considered a grave offence. And Asano is tricked into committing seppuku and Princess Mika is taken hostage to marry of Lord Kira.

Asano's Samurais are now master-less and fugitives. A year later, of the numerous Samurais, 47 of them band together under the leadership of Oishi (Hiroyuki Sanada) to seek revenge. They take the help of Kai and avenge their master's death.

The performances are impressive. Keanu Reeves is stoic and slips into Kai's shoes with equal grace and fervour. Kino Kikuchi as the bewitching enchantress who morphs from a wolf to a spider to a dragon and more is engaging and so is Kou Shibasaki as Mika.

The dialogues are crisp and spaced out. It suits the characters as well as the era that the story is set in. The disciplined and coordinated movements and action of the concubines in the palace can seem a bit ridiculous. But then, that's Japanese style!

The production quality is superb with spectacle costumes and lavish sets. The setting and atmosphere of the picture is also dark and mysterious. Visually, the film is colourful and impressive. The lights are used effectively to give shaded hues to the characters. The computer-generated and animated images merge beautifully with the realistic sets.

Unfortunately, this strong narrative lacks the charm to touch you emotionally. One can't put a pulse on what is wrong with Carl Rinsch's directorial venture. Probably it's the blend of fantasy along with high-tech images and treatment of the story, that has robbed the viewer of an emotional quotient.

Nevertheless, "47 Ronin" is a better than an average film that would appeal to lovers of period drama.

Anurag Kashyap Clarifies His Image of 'Consuming Drugs'; ...
39 seconds ago