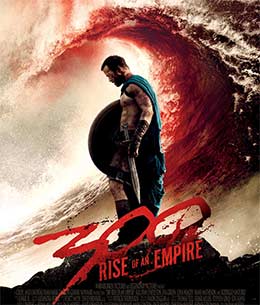 Wonder how many viewers would be interested in another version of the oft repeated history of ancient Greece? It's the story of how the Persian King Xerxes, with over 1,000 ships in his fleet, could have easily conquered the divided Greeks in Circa 480 BC.

Based on Frank Miller's graphic novel "Xerxes", the film takes off on a very verbose expository note by the Spartan Queen Gorgo. Her explanations weave in the loose ends as well as the backstory of the characters, giving an insight into the history of the period.

Driven by vengeance, the drama in the "300: Rise of an Empire" runs concurrently to the original "300" but from a different perspective, the naval warfare. While the earlier film concentrated on the land fight at Thermopylae, this one concentrates on the battle in the Aegean sea, with the storyline running in parallel most often.

The inciting moment of the film is when a Greek General Themistokles shoots an arrow killing the Persian King Darius. Darius's son, Xerxes transforms himself from a mere human being to the 'Golden God King' and swears revenge by conquering Greece. In this mission, he is assisted by his fiercest naval commander Artemisia who is a Greek by birth but was brought up by a Persian.

So while the Spartan King Leonidas engages Xerxes in a land battle at the "hot gates", the film concentrates on the showdown between Artemisia and Themistokles with a far smaller force, in the sea.

The trouble is, even with excellently and cleverly maneuvered tactics on water, the recurring battle scenes eventually leads to visual fatigue. Though some of the fight scenes are very well choreographed, it's the blood and gore scenes, that look very synthetic, especially, when Artemisia chops off a head and the torso bounces off spurting blood all over. This could be repulsive for some viewers.

On the performance front, the film belongs to Eva Green. Clad in fitting black leather, she plays Artemisia from the bottom of her heart. Her actions throughout the film are notable as hers is the only character that has a complete arc and any kind of real context.

Cast opposite her is Sullivan Stapleton as Themistokles. Though he is good, he is not too impressive. He lacks the charisma and aura of a go-getter. But then, in the scene; after a rough sex brawl with Artemisia, he returns to his camp with a confused expression on his face - he pulls off this scene with the grace of an expert. Though he looked silly and muddled, it works appropriately for the situation.

Lena Heady, who once again plays the Spartan Queen Gorgo, delivers some of the film's best lines, as well as a few of its most absurd ones.

The screenplay, by Zack Snyder and Kurt Johnstad, lacks the zing of a thrilling historical, and overall, the film lacks the wow factor. Though every scene is a loud spectacle which enhances with the 3D effects, the film slips into a videogame mode.

Director Noam Murro, who had earlier delivered the romantic comedy "Smart People", has probably found it hard to ape the original narrative structure of "300", and it shows. The dialogues are too feeble and laboured. What's more? The characters have inconsistent accents which make the entire involvement far-fetched.

After half an hour of watching the film, you feel the film rambles and gradually it becomes monotonous and wearisome.

Harshvardhan Rane decides to sell off his bike to get oxygen ...

After rise in COVID cases, IFTPC issues a letter to TV producers