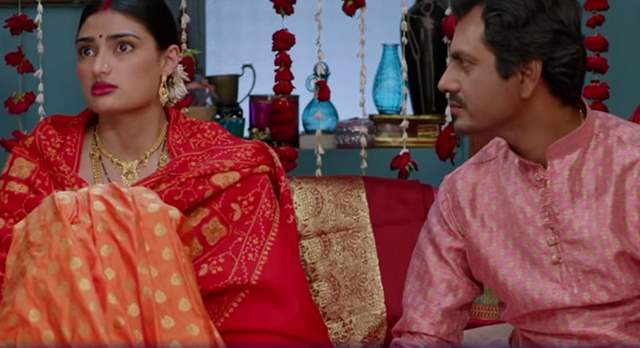 Nawazuddin Siddiqui and Athiya Shetty starrer Motichoor Chaknachoor has yet again landed in controversy. The film's director, Debamitra Bansal is shocked with the end product as she claims that this is not what she had made.

For those unaware, Debamitra had a huge fallout with the producer of the film, Rajesh Bhatia and that led to her  walking out of the project. Now, after the film has released and has been receiving flak from the audience, she is claiming that the movie’s story-line has been totally changed and it's completely different from what she had made. She is now disowning the film at this point.

In a conversation with an entertainment portal, about watching the final product, Debamitra said, "I was shown the film when the court had issued an order to Rajesh Bhatia (producer) stating that you will have to show the film to the director. And after seeing the movie, I thought to myself: OMG! What have they made?But, only you directed the film...I had directed the film no doubt, but they chucked out portions and introduced unnecessary shots. There is nothing left in the film. It looks like a C-grade Bhojpuri film."

She further added, "I wish I could show you my version of the film. After the fight, they decided to edit the film and Bhatia himself set about to do it. Also, the story was changed totally. This isn’t the story that I set out to make. They have ruined my film and my career completely.About 10-15 days before, a senior official from Viacom18 told me to show them my version. They loved it so much that they couldn’t stop praising it. I asked if they could come up with a solution. But, they did not. It was pre-decided to release the film on Nov 15 I guess, so they went ahead with Bhatia’s version. My film, I would say, stands ruined.

They have credited you as the director...Yes they have and I called them up after watching the film asking them to take off my name because this is not what I had made. It’s such a horrible film. I have, in fact, written on Facebook asking people to not watch this film."

She further revealed how Athiya broke down when she spoke to her after the movie was released, "She (Athiya Shetty) has seen the film and was horrified to see the end result. She said it’s such a bad film, it can’t release. She is feeling dejected that after so much of hard work, this happened. The day she saw this film, she started crying."

The director further went on reveal about Nawazuddin's classic performance in the movie that she had shot. "I honestly don’t know about him because he hasn’t seen my version and instead decided to go with the producer. You have to see my version to see Nawaz nail it. In this version, some of his reactions in the film are not what should have been.

So you are virtually disowning the film at this point…100%, this is not my film at all. In fact, after seeing the film I even told them to untag me from each and every post because this isn’t my film--- and nor am I promoting it.

"I want the same answer because if Viacom18 loved my film and is saying that the other version had a lot of problems, why couldn’t they stand for my film. I don’t understand what contract they had signed. At least a good editor on board even if I was chucked out would have made a difference. After Chandan Arora (Editor) was shown the door, they brought some inexperienced person to edit the film.So, you are not planning to see the movie in a theatre?Definitely not! Even the songs that I saw made me uncomfortable; there is no story. Everything is out of place. I feel sad that sabki mehnat kharab hui."

Could you explain the idea behind the title Motichoor Chaknachoor

"So the basic idea was that in the heads of the lead protagonist motichoor ke laddoo phoote hain ki main inse shaadi karlungi and Dubai chali jaungi and the man thinks he will marry the girl and get what he hasn’t got till now. But during the muh dikhayi, they come to know that the guy doesn’t have a job. They start fighting on the Suhaag Raat. It was a different story altogether. But none of that came out in the story. Ab toh mera chaknachoor ho gaya hai."

Rangoli Lashes Out on Twitter, Warns them to See what her Sister ...

Paras Chhabra: Fans should be not be wasting their time trolling ...