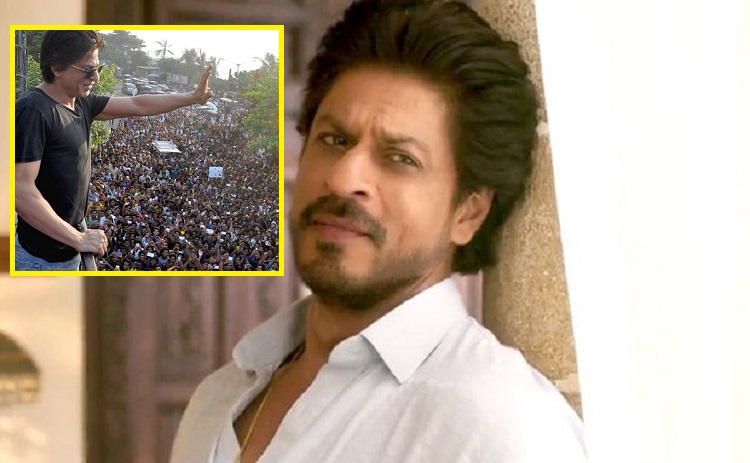 Team "Jab Harry met Sejal" have been treating their audience with one marketing aces after another. Shah Rukh Khan and the team have embarked on a promotional spree that has left the audience gushing and the girls on their toes.
While SRK aka Harry left the Sejals of Ahmedabad smitten, Sejals from around the town have been flocking in numbers at Shah Rukh Khan's Mumbai residence, Mannat.
The superstar, who recently visited Ahmedabad to meet the Sejals of the city along with Imtiaz Ali launched the film's first song titled "Radha" amidst girls named Sejal!
The pictures from the event where several Sejal's were striking a pose with SRK went viral on the internet, and the opportunity to meet none other than the Baadshah of Bollywood, Shah Rukh Khan lured girls named Sejal from around the city.
More than 400 Sejals flocked Shah Rukh Khan's Mannat to catch a glimpse of the actor and greet him owing to his nationwide hunt for Sejals.
Shah Rukh, whose upcoming Imtiaz Ali directorial is titled 'Jab Harry met Sejal' has launched a search across India for Sejals. Entries from more than 7000 Sejals have already flooded the film team, with the number increasing by the day.
Although, women and fans visiting Mannat is a usual phenomenon, the girls are primarily making the most of this opportunity to meet Shah Rukh.
In a span of days, the number of girls named Sejal has been baffling.
Mannat's chief security went into a complete tizzy when the girls thronged the gates desiring to meet their Harry as their names were Sejal!
Infact, to validate their identity the girls even show their ID cards verifying their names hoping to have access to the actor.
The number of Sejals reaching Mannat has been on a high, courtesy Shah Rukh's promise to visit the city with a maximum number of Sejals.
Team 'Jab Harry met Sejal' has been on a promotional spree delivering innovative marketing strategies. The makers unveiled a series of 'mini trails' that highlight the personalities, complexities and dreams of Harry and Sejals.
The 'mini trails' and the recently launched song 'Radha' from the film have left the audience in immense anticipation for the film to hit the theatres.
Presented by Red Chillies Entertainment, 'Jab Harry Met Sejal' is directed by Imtiaz Ali. The film stars Shah Rukh Khan as a Punjabi Harinder Singh Nehra and Anushka Sharma as a Gujarati girl named Sejal Jhaveri, 'Jab Harry met Sejal' is all set to release on August 4th, 2017.
0 Likes