Imagine TV has always come up with non-fiction shows that are unique in content. Marriages have been their prime theme and after Rakhi Ka Swayamvar, Rahul Dulhaniya Le Jaayega (Swayamvar Season 2) and the yet to come Ratan Ka Rishta, here comes another reality show on wedding, Shaadi Teen Crore Ki.

But what is the show all about?

Mona Singh and Ali Asgar, the hosts of this big fat wedding show enlighten us... 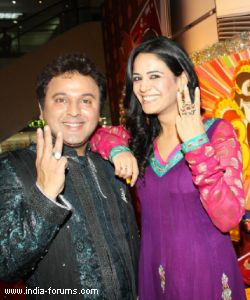 What is the concept all about?
Mona: The concept basically is that we are funding the marriage of a couple in Delhi and it is going to be a Big Fat Wedding. Both the girl and the boy belong to a middle class family and their marriage has already been arranged in March.  We were sent there to know how much their budget for the wedding is; the boy's side had laid out a budget of about 5 to 6 lakhs and the girl's side wanted 12 lakhs for the whole wedding. When the concept of the show was explained to them, they felt that the channel would increase their budget to a scale of 50 lakhs. And that's when then we broke the news that they are going to be given three crore rupees for the wedding.

Ali: The concept of marriage in our country is really rich and more than the boys, girls get really excited about the wedding. They get excited about the rituals like mehndi, haldi, joota chupana etc which they enjoy the most. But most of the times there might be a constraint because of finance and many a times the dreams are left as just dreams.  And hence the channel decided to come up with something different.

How is the money divided and how are they going to spend it?
Mona: The money will be divided among the boys and the girls' side equally and they will have to spend the amount in the wedding.

Ali: The three crores will be divided among the boy and the girl where each will be given 1.5 crore each. The channel will monitor on how they are spending it because they will have to spend the whole thing.

What is that you would like to show through this?
Mona: We are trying to show what will happen if something comes up beyond their dreams. As we said earlier, the family had received thrice more than what they had expected and now they will be able to get the best of the best things for their wedding. For example, for a normal wedding, we do not think about a wedding card beyond fifty rupees. Now in the same place they are going to make a card of Rs 5000 which is made out of gold.

Where will the whole amount be spent?
Ali: Only the marriage is fixed right now and all the rituals are yet to happen. Hence the amount will be spent on the invitation cards, the presents, sangeet, mehndi, haldi, parties like tandoori nights, bachelors' party etc. There will be more than three hundred dishes spanned out for each ritual and each party will be theme based.

How will you both be involved in the show?
Mona: We both will be there throughout the wedding for all the rituals and customs. I will accompany them in shopping and arrangements as well.

Is there any particular reason behind taking a Punjabi family?
Ali: There is no special reason as to why we took up a Punjabi family. We know that Punjabi weddings are very grand with so many rituals, and they live and enjoy their life king size.

If the boys' family asks for dowry, then it is a sort of saving?
Ali: I think there is no such clause and I do not think that the channel would promote such a social evil.

How are the two families?
Mona: People are very sweet and today I have a bond with them; the girl's name is Jasmeet which is what my actual name is and hence the bond has started from there.

Ali: They are very emotional and simple people, and do not know how to act in front of the camera and all their emotions are very real. Both the girl and the boy are very innocent. The boy is involved in his dad's business and the girl has completed her studies.

How has been the experience till now?
Ali: It is real fun for me and also for Mona as it is a Punjabi wedding. The important thing is that our reactions are completely impromptu. And now I am one among the family of the boy. And the interesting thing is that at the same moment I would be handling the emotions of around twenty five to fifty people. I am going to deal with them on a human level. This is an occasion of marriage and people will react differently, and that's what I have to deal with.  It is a very good learning experience and a very different homework for us. And this show is completely Indian and original and it is not adapted from any previous show.

Mona: Both are Punjabi families, and I too am a Punjabi and hence I am having the best phase of my time. The family is in Delhi and the weather is really nice.

What made you decide to do the show?
Ali: I always wanted to do something wherein I could have my creative freedom to give inputs rather than do what is given in the script. And here, I am not on the stage, instead I will be with them wherever they go. And here I have to deal with everything carefully because it is a real family and they should not feel that just because I am an actor I am doing certain stuffs.

How is it working with Imagine?
Ali: I started with Imagine as an anchor for their show called Shava Shava which was my first show as an anchor where I went on to get an award as well. So I always have that bonding with Imagine. I have also worked with the production house SOL in their show Zara Nachke Dikha and Amul Voice of India. Now I have quit FIR which I was doing, so that gives me space for this show.

Mona: I started with Imagine by performing a cameo for Radhaa Ki Betiyaan Kuch Kar Dikhayengi and then I did Meethi Chhoorii No. 1. This is the first time I am doing a full-fledged show with the channel and I am having good fun with the entire team. SOL team is great to work with and we all are having a party in Delhi where nobody feels that we are actually working.

An Initiative By Artists Spreading Awareness and Motivating People To ...

sanw 9 years ago thanks for the article. this program begins today

simran_singh_24 9 years ago Wish I could organise a protest against this stupid and senseless show. I'm ANGRY with Imagine.

There are so many serious issue in India regarding money, govt have no money to spend on those issues to solve out n here TV industry busy in wasting money in all those stupid things by making all these nonsense show.

LOVE_DMG 9 years ago so we are going to turn our tv on everyday and watch some randome pple wedding happening?

what it going to be some cheesy love lines, crappy fights.

should have given the 3 cors for someone education, then they can get a job plan their own grand wedding.
what a wast.

Gauahargeous_N 9 years ago this show is gonna suck for sure!

_Ananya_ 9 years ago 300 dishes at a wedding?? What about the wastage of food? It would be far wiser to donate the money or if you want to gift it only, allow the families to save the money for the bride and bridegroom's future. Don't waste money. A shaadi can be fun even without senseless extravagance.

habsfan 9 years ago hey imagine, what a waste! go make some houses for homeless people. it will worth it.

what a way to make money through addvertisements! such a greedy channals...........

Sanjay Dutt returns home after being admitted to the ...
37 minutes ago

Satish Kaushik Recalls 41-years of struggle and Courage to ...
47 minutes ago

exclusive
Exclusive Avneet Kaur: I really wanted to create some content for the ...
57 minutes ago