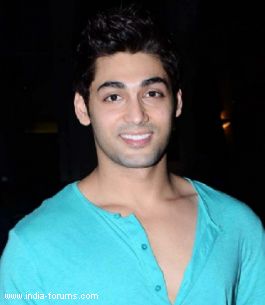 He has kissed three different heroines in three films. No wonder actor Ruslaan Mumtaz's actress mother Anjana was worried that after Emraan Hashmi her son will get the "serial kisser" tag in Bollywood.

"My mother is worried, and she keeps telling me that 'no girl will marry you'. She feels I will create an image, a perception and will be called the next serial kisser. In three films, I have kissed three heroines already," Ruslaan told IANS.

In his debut film "Mp3 - Mera Pehla Pehla Pyaar" (2007), he locked lips with Hazel Crowney, while in "Teree Sang" (2009), he was seen getting intimate with Sheena Shahabadi. If that wasn't enough already, in his third film "I Don't Luv U", he once again gets up close and personal with his co-star.

Releasing May 17, the film will see him romancing debutant Chetna Pande. The story revolves around an MMS scandal, and how if affects the relationship of two youngsters.

Ruslaan says he pacifies his mother with the fact that "you can't choose your films based on whether or not it has a kissing scene".

"If I like a story, and it requires a kiss, it's okay. But I won't work with people who want to add a kiss to the story just like that," he said.

"They have so many avenues where they can watch it all for free. There's internet, the phone...why would the audience pay Rs.300 for a ticket to watch intimacy in a film," said the actor.

Nevertheless, he is quite comfortable kissing in front of the camera.

"There's nothing personal about kissing for a film. There's no reaction to it. But when we were shooting for 'I Don't Luv U', Chetna was nervous. I told her, 'Just don't worry, and do it in one take'. That's the best way to do it. It gets uncomfortable when you have to do retakes and do it over and over again," said Ruslaan.

"I Don't Luv U", directed by Amit Kasaria and presented by Amrapali Media Vision, is produced by Anil Kumar Sharma in association with Pallavi Mishra. The movie is said to be inspired by the 2004 MMS scandal involving two school going students.

Back in 2011, Ruslaan was himself embroiled in an MMS scandal, featuring the daughter of a veteran actress. He said he was "never involved" in it.

"My only connection with it was that a close friend of mine featured in it, and it is only a coincidence that I am featuring in a film around an MMS scandal," he said.