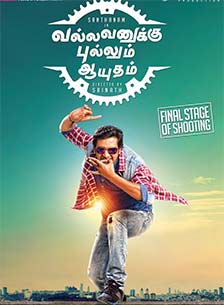 Comedian Santhanam, who's playing lead in upcoming Tamil romantic-comedy "Vallavanuku Pullum Aayudham", says that his mother is worried about his debut as a lead hero because she feels that his career may end if the film doesn't click at the box office.

"Vallavanuku Pullum Aayudham" is the Tamil remake of Telugu blockbuster "Maryada Ramanna", which introduced comedian Sunil Varma in the lead.

"My mother is worried that I may not get films if this film bombs at the box office. All these years she never got worried because she knew that as a comedian, I'll always have a few films in hand and keep myself busy. But she feels as a hero I may get only one film a year," Santhanam told IANS.

"She's not happy about my decision to play lead roles. She feels that I'm safe as a comedian and can keep myself employed for a longer run," he added.

Santhanam, however, says his mom's worries have not affected him.

"I have been offered several films in the past to play lead role but I found this particular film to be apt. I waited for a right opportunity and when this came my way, I was confident and decided to take the plunge. My mom way worry, but she'll pray the most for me," he said.

Sushant Singh Rajput Revealing about the Moment he Got Very Nervous ...

Before Death, SP Balasubrahmanyam Has Sung For Upcoming ...
22 minutes ago

Sushant's Family Displeased With Attention Being Diverted ...
24 minutes ago

After Ten Months Jacqueline Fernandez has Finally Re-united ...
34 minutes ago