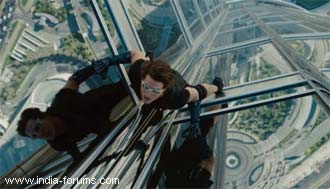 Visually, two things that instantly transcend the immediate boundaries of a viewer's intellect to land straight inside are sex and violence. Thus brands that can no longer appeal to your intellect, or are too lazy to try, resort to either or both. That brand can either be a product or a movie star.

This is indeed a trend observed among male movie stars. Ageing stars, who no longer have the confidence of their youth, resort to movies that have an overdose of sex and violence. If you have followed Tom Cruise's selection of films lately, you would have observed an over-reliance on action at the cost of other factors. 'Mission Impossible 4' is no different.

He unabashedly stays within the confines of done-to-death cliches to give you not a film, but a roughly stitched collage of some very well done action sequences. Thus, what is sacrificed at this altar of dreary cliches are story, characterization, plot, subplots... basically everything that makes a film a fun watch. 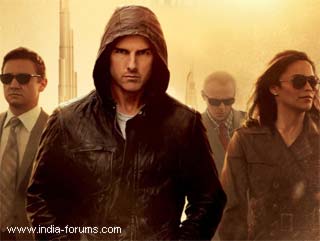 The story of 'Ghost Protocol' is simpler than the elaborate charades you made up as kids. Smoked out of a Russian prison, Ethan Hunt and his renegade team, have to hunt down a Russian scientist with launch codes for nuclear warheads and save the world.

Along the way there are some lame dialogues, some pretences at making up subplots and a star way past his prime, trying desperately to hold on to the action genre like his character hangs to the ledge of a building.

After seeing 'Ghost Protocol' as a discerning viewer, you'll realize that Tom Cruise has lost the plot, figuratively and literally. All his recent films have been shoddy excuses in the name of cinema, but had very good action. The Church of Scientology does not seem to be helping our star. He needs to enroll himself in the church of cinema.

The action scenes do not disappoint. They are elaborately conceptualized, beautifully shot and adeptly edited to make you sit at the edge of your seat. Tom Cruise might have forgotten other things, but he hasn't forgotten the art of choosing the best action team in the industry.

The film thus ends up being a never-ending action ride from the windows of the world's tallest building, to the tunnel under the world's worst prison to the streets of Mumbai and into a parking lot apparently located in India, but which you know will not exist in the country for the next few decades.

If you want to watch the film for it being shot in India, and for Anil Kapoor, you'll be sorely disappointed. Only two minutes of actual India make it to the film. The other shots thought to be filmed in the country, have actually been shot in Indian localities of North America. Kapoor barely has a few minutes' role as a lecherous business tycoon. It's not enough either for his fans or his detractors.

The mission impossible for a star is thus actually mission simple. If you indeed choose to accept mission stardom you get to date beautiful women, hobnob with the richest men and pretend as if your existence mattered. Sadly, cinema, in such pursuit of name and fame, becomes a necessary evil to be shot, chased and exploded out of a film just like its villains.