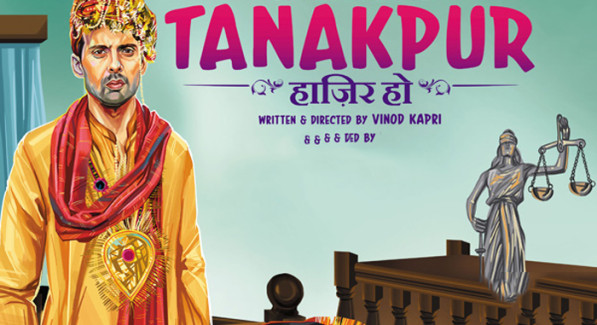 Written and Directed by a journalist-turned-film director Vinod Kapri, "Miss Tanakpur Haazir Ho" is a social satire inspired by true events. The film delves into how; numerous, ridiculously false and blatantly obscure cases are registered in the Indian courts.

This vengeance saga, camouflaged as a comedy, reveals the extent to which some people can stoop and highlights the corruption prevalent in our system.

Set in the district of Tanakpur somewhere in Uttar Pradesh, Suvalal Pradhan (Annu Kapoor) a "10 + 2" educated, village headman and a wannabe politician who often pouts, "Don't take me otherwise" is constantly suspicious of his wife, Maya's (Hrishitaa Bhatt) fidelity, as he is insecure of his own virility.

One day, after catching his wife red-handed with her paramour Arjun (Rahul Bagga), he realises that his own reputation is at stake. So, seething with anger and revenge on his mind, he accuses Arjun of raping Miss Tanakpur, his buffalo. How he keeps up with this charade, forms the crux of the film.

While the premise is amusing, the plot, treated in a satirical manner, meanders capturing Pradhan's idiosyncrasies.

Ravi Kishan, with kohl-rimmed eyes as Suvalal's buffoonish right-hand man, and Sanjay Mishra as the conniving and greedy Panditji are themselves. Though funny in certain scenes, they play stock characters that don't elevate their character-sketches.

Om Puri on the other hand shines as the corrupt police inspector. As always, he is a natural before the camera.

Hrishitaa Bhatt as Pradhan's wife has very little to offer, by way of performance. Rahul Bagga as her lover Arjun, has a passive role and manages to evoke sympathy through his effective portrayal. The rest of the supporting cast too is very expressive, especially Rahul's parents and his old Aunt, Bua.

With decent production values, the settings and the frames are realistic. Yogesh Jani's cinematography captures the rural milieu very aptly.

The background score by Vinayak Netke along with the songs "Naach basanti," "Andhera andhera" and "Sasure ke kaudy laga gayi" by music directors Palak Muchhal and Sushmit Sen mesh well into the narration.

While the director has taken pains to dramatise the reality, he has resorted to some lazy back-hand approach in some scenes. The most notable among the few are the mela *(fair) scene and the bus scene in which Arjun's Bua is travelling. Also, his writing lacks the finesse of a well-researched subject in terms of character-sketches.

Packed with quick retorts, the dialogues are taut and crass. These generate laughter at the intended moments and will be lapped up by the front benchers.

Overall, this is a fairly enjoyable film, but a tad too lengthy. Although it tackles a universal truth about India, it has a very local and regional flavour which may not appeal to everyone.