Ashim Ahluwalia is one proud man as his film, Miss Lovely, finds its way to the prestigious Cannes Film Festival. This turn shines a light on the the subject of the C-Grade films which were once regularly churned out by the entertainment industry. Until the era of multiplexes changed their destiny, they constituted an integral part of the business. These films still have a niche in small towns, but without Miss Lovely, their former legacy might have been all but forgotten. 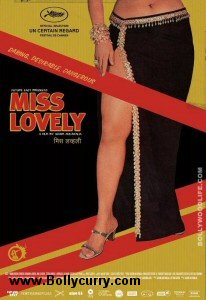 For the generation that reached adulthood a decade or so ago, when the Internet was still evolving and there were none too many outlets for one's sexual curiosity, C-Grade films served as a means for audience members with particularly bold interests to find answers to their questions. The director himself had such experiences to draw inspiration from, having followed the genre during his youth at various cinema halls in Grant Road, Mumbai. He remembers that most of them were ostensibly Malayalam movies, but had clippings of blue films interspersed here and there.

Ashim Ahluwalia's film has been entered into the respected Un Certain Regard section at Cannes, where it opened on 16th May, 2012. He followed in the footsteps of Vikramaditya Motwani, whose masterpiece Udaan was also screened under the same category.

Whether or not the film deserves to be classified in the same way as its heartwarming predecessor Udaan is debatable; nonetheless, we congratulate the film on having been selected for display on this prestigious platform.

Before Death, SP Balasubrahmanyam Has Sung For Upcoming ...
49 minutes ago

Sushant's Family Displeased With Attention Being Diverted ...
51 minutes ago