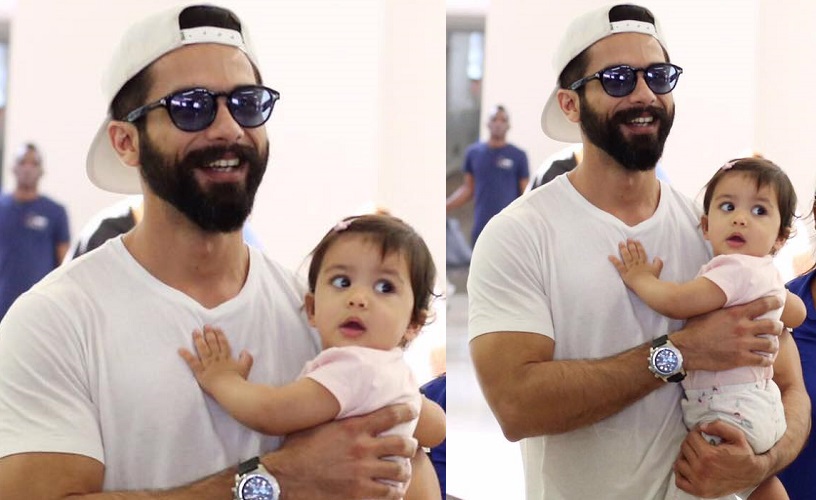 Shahid Kapoor and Mira Rajput Kapoor's baby daughter, Misha Kapoor will turn one on August 26, 2017. And guess what? To mark the special day of their little princess, the doting parents have planned for a birthday party in New York.
As reported earlier, this time at the IIFA Awards, Mira and Misha have accompanied Shahid. The family flew down to the United States for the 18th edition of the International Indian Film Academy that will wrap up by July 16, 2017.
After fulfilling his professional commitments, Shahid will be devoting all his time to his daughter and wife. He will be taking them on a tour in NYC and will be celebrating Misha's first birthday there. Joining him will be director Karan Johar and his "Shaandaar" co-star, Alia Bhatt.
"Shahid will host a party kick-starting the celebrations of Misha's first birthday. From the film fraternity, Shahid has invited Karan Johar and Alia Bhatt for the do. Shahid will also spend the next few days showing Mira and Misha around," mid-day quoted the source as saying.
"It was a surprise for everyone when Mira and Misha were seen accompanying Shahid to the awards show. With the gruelling schedule of Padmavati, he hasn't been able to spend much time with his family. So, Shahid decided to make a holiday out of this work trip," added the source.
Talking about his IIFA rehearsals, Shahid says, "It's a picnic for you. We are busting our a$# on stage rehearsing, trying to make it a good night. It's a huge platform, it's a huge award night and the pressure's on the actors."
"I really give it my best when it comes to IIFA because I feel the warmth beneath. It's a great platform, it's an international platform. You are performing to a new audience almost every time," he added.
Shahid also revealed details about his lunch that he has planned with Alia Bhatt on Saturday.